How was your Independence Day? Do you agree with me that it should always fall on the first Friday of July? It was such a great way to begin a beautiful weekend!

I’ve been spending a little time remembering previous 4th of Julys and am a little surprised by how many distinctive memories I have of this particular holiday. I guess those fireworks aren’t always mere colorful explosions in the atmosphere. Sometimes they’re more earthshaking.

July 4th, 1976 was the first time I ever met my friend Virginia. We were at a marina on the west shore of Greenwood Lake, probably waiting for fireworks to go off from Chapel Island. Although I moved that summer and wouldn’t attend the same school as Virginia until two years later, I’ve never forgotten that exact moment, under a sky filled with anticipation, when we met.

I once flew into NYC on Independence Day. I had been out of the country for 5 weeks and I recall being greeted at JFK by friendly faced strangers giving away American flags. It felt like a hug. Another year, I had the unforgettable experience of being on a hop on/hop off tour bus in London on July 4th. As I glanced to my right the historic marker on a row house caught my eye – Home of Benedict Arnold. How perfect.

There was the year spent at a campground somewhere in Washington State’s Yakima River Valley. We had been camping for about a week and the somewhat seedy location of the campground seemed a major step down after the beautiful campsite we had enjoyed at Doe Bay on Orcas Island.  My perspective shifted after spending the afternoon getting to know some of the residents – and I do mean residents. It turns out a tremendous percentage of our fellow campers actually lived at the sad campground at which we had found ourselves. I was struck by the threat of combustibility which was present, the result of close quarters and even closer budgets. I was happy to get back on the road the next morning. 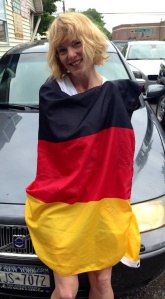 This year, I enjoyed a perfectly colorful and delightfully explosive holiday. A morning spent with someone who inspires me to be my best, an afternoon watching World Cup soccer and an evening with the ideal view of Albany’s annual pyrotechnic display. Freedom was appreciated. More memories were made.  There were fireworks.