If you had asked me that same question 35 years ago, my response would have been “baby soft,” as in Love’s Baby Soft. Unless it was summer, of course. In summer I was devoted to Love’s Fresh Lemon. You 70s girls know exactly what I’m talking about, don’t you?

In many ways I’ve moved on since those days. I progressed through Estée Lauder’s White Linen and Clinique’s Elixir (there may even have been a brief interlude of Elizabeth Arden’s Sunflowers, but I’m not willing to admit that publicly) until I finally landed about 8 years ago on Chanel’s Chance.

Everything about Chance was perfect for me – the name, the package, the slightly spicy, definitely sexy nose…it was a grownup fragrance in every way. I wore the lighter version (eau fraiche) during the warmer months and imagined that my fragrance, like the tinkle of my charm bracelet, would be a signature for those closest to me. I had found my scent.

Recently, though, I found myself sometimes going days without a spritz. I didn’t feel the desire to punctuate my presence with Chance. I was over it. 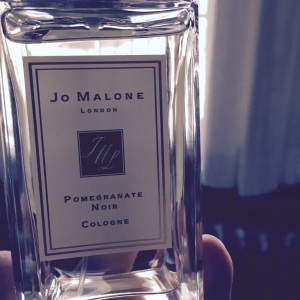 On my return from Paris we had a layover in Dublin, an airport that happens to have an excellent array of Duty Free boutiques and stores. I spotted the Jo Malone shop and immediately thought of my friend, Will, who wears a Jo Malone fragrance that makes me want to lick him whenever he has it on. Which is exactly what I told the lovely older woman working at Duty Free. After she recovered, she assured me in her lilting brogue that we would certainly find that, immediately.

The shop is simple, almost stark. The 16 available colognes were arranged in general categories – citrus, floral, spicy and woody. I assumed that the fragrance I obsessed over was woody or spicy because I love cedar and bergamot. After applying two scents and grabbing a bite to eat, I returned to the store disappointed that neither was quite what I was looking for. The saleswoman handed me a floral choice, I inhaled and immediately knew I had found my new fragrance – Pomegranate Noir, the very same scent that Will rocks. Will’s scent was now mine, and for a bargain of only 81 euro or about $85. The same bottle retail goes for $120.

One thought on “How do you smell?”