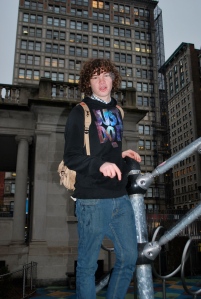 We celebrated a birthday this week, in a fairly low-key fashion. While I generally write a birthday piece and devote it to the celebrant, I struggled with a cohesive message when it came to my middle son’s birthday and a litany of pithy observations and attributes just felt forced. You see, he is, as my estranged mother likes to assert, the one who is “just like me.” While she would like to believe that he is my punishment for all the terrible things I put her through during my own teen years, I disagree. He is my triumph.

When my first child was born, organized me was totally ill prepared. He was early, he was small and he arrived surgically rather than in anything remotely resembling the Bradley birth for which we had been preparing. He became critically ill, a consequence in my mother’s eyes of my own stubbornness and incompetence, rather than the fault of a medical team who failed to make a routine and simple diagnosis. Feeding him was a challenge and he missed milestone after milestone. With all of the necessary interventions, it was a long time before I felt like he was “mine”* and could confidently manage his care and develop routines that worked for us.

Griffin, though? He is my child, not my mother’s, not a medical patient, not an early intervention case to be managed. He arrived on the precise day for which I was hoping – the last day of April and not the first of May, my own mother’s birthday. He is a gift to me, my very own diamond, albeit one which remains in need of a little polishing.

I birthed this child and fed him from my own body for more than a year. Together with his dad, I dressed and nurtured him, feeling capable in my veteran mother status. He started running as soon as he was vertical at a mere 11 months. His first word was “Go!” which he yelled at the vehicle in front of us, after the light had turned green and the driver failed to step on the gas fast enough. He continues to be the child who most resembles his parents in terms of physical strength, coordination and interest in athletics. He can thank his Dad for his gorgeous curls and rue his maternal genes which came complete with freckles and a mild form of a condition known as pectus excavatum.

Mirroring my own personality, he is inclined to intolerance when it comes to bureaucratic educational nonsense and tends to be a bit of a fashionista. Like his dad, he has a mind for math along with a tendency to procrastinate and then respond with frustration when he finds himself overwhelmed by an avalanche of responsibilities. He’ll make it through, though. He’s smart and sensitive, social and funny as a hell, and I understand him in a way that feels completely intuitive and natural.

If being “just like me” means my son will find his own path through life, with the added benefit of two parents who love and support him, I couldn’t be more appreciative for the sweet “punishment” the universe has imposed. He is just what I deserve.

*When I say “mine,” in no way am I suggesting that he is more mine than he is his father’s. Of course, he is ours.