Taken for a ride

It began with a simple email. I had seen an article recently about an authentic WWII bomber plane coming to visit Albany and knew two of my three sons would be interested in getting up close and personal with a piece of history.  I forwarded the story to my 18 y/o and he immediately responded wanting to know if his 10 y/o brother could be taken out of school for the day to visit the airport.  Uh, no, but I agreed to take them both in the afternoon after school.

After checking the now updated article, we drove up to Albany International  Monday, arriving at approximately 4pm.  We immediately saw the plane on the tarmac and a crowd of perhaps 40 or 50 people.  I dropped the guys off while I parked, meeting up with them less than 5 minutes later only to learn that there would not be any tours conducted due to a “lack of time to move all the people through before 5pm.”  Apparently the plane had arrived late and had then been occupied with providing scenic and  expensive rides meaning we regular folks without $800 a head to spare would only experience the plane from the outside. 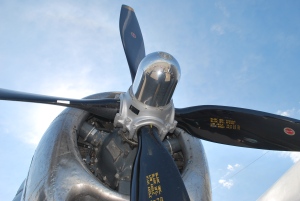 I don’t want to sound bitter or overly annoyed, but I sure am glad it only takes me 40 minutes roundtrip from my home to the airport.  I would have been pretty damn irritated if I had made a longer trip based upon the promise of being able to actually get on board this WWII relic.  The boys were disappointed but cool, in part I think, because they had toured the U.S.S Slater just 2 days earlier and had so enjoyed that experience.  FiFi wasn’t a total bomb, but, it would have truly soared if her visit had been better executed.

Did anyone else get there and have their own impressions to share? 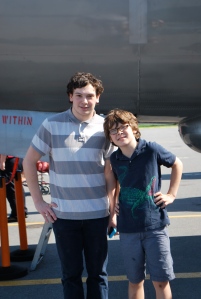