We’ve been back for about 10 days and there are some really positive impressions from our trip that I thought to share. How about one for each day we were there?

1. Roads. I don’t think I’d mind paying a 19% VAT if the money went into highways and other infrastructure. We traveled a few hundred miles on the autobahn and those roads are beautifully maintained.
2. Groceries. In Berlin we shopped at Lidl which is similar to Aldi. For less than $9 I bought the following: a fresh pineapple (fair trade), a quart of apple juice, 2 croissant, a package of sliced gouda, a large plain yogurt, a small fruit yogurt and a pint of chocolate milk.

3. Beer. I almost exclusively drank hefeweizen, although I had the occasional shandy and in Berlin I drank a specialty beer called Berliner Weiße mit Schuss. It’s wheat beer with a shot of woodruff. Kind of sweet but a nice way to end the night, I thought.

4. Public transit. It’s available, easy to understand and cheap. A day ticket cost approximately $7.50 and my son rode with me for free. 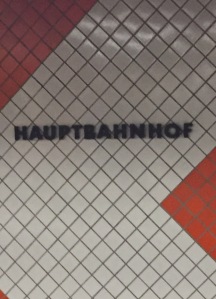 5. Cleanliness. The streets, the bathrooms, the trains, with only one exception (a bathroom at a big tourist spot) all were immaculate.
6. Markets. The Munsterplatz is the place to be if you’re looking for produce, flowers, cheese, meats and prepared foods. We also checked out some markets that were more like American flea markets, also. Good deals were all over the place.
7. Flowers. Germans like their gardens and even in early spring, most homes have tended plots of land. The lilacs bursting open everywhere were lovely, too.
8. Ice cream and cake. There’s an acceptance level of these sort of items perceived by Americans as “treats,” and both were included in our afternoons.
9. Coffee. Dark, strong and delicious.
10. Punctuality. The only clock I’ve ever seen not tell accurate time in Germany was the battery operated one in our rented apartment. I love counting on the church bells and public clocks to keep track of time for me.

A bonus thing: DOGS! They were everywhere – restaurants, cafes, trains, stores, yet, not once did I see any piles of poop.

The only that I didn’t appreciate was the prevalence of cigarette smoking that still goes on. It seems like smoking is much more pervasive in Germany than in the States. I suppose I could complain that the weather wasn’t great either, but, really…spring is a crap shoot in Albany, too. At least the hail that fell on me was German hail.