I’ve seen U2 a half dozen times, but I don’t think I’ve ever been as excited for a show as I was last Wednesday. Every single thing aligned to make for a perfect night – the weather was phenomenal, the company was sublime and our seats exceeded my expectations. The foundation was all in place and Bono and the boys stepped up and provided yet another musical experience to treasure. Unbelievable.

The last U2 show I attended was in Montreal. My middle son and I drove up and had a great night. As had been my previous experiences, the show was fantastic and I was so happy that I had made the effort to get there. While I didn’t imagine it as my last U2 show, it seemed that that was what it would be. After that tour, Bono had a cycling accident that did some damage and then the Edge fell off the stage at the beginning of their next tour. Having no interest in seeing a broken down band, I figured I was done. Until they announced the 30th anniversary tour of the Joshua Tree, that is. Game on. 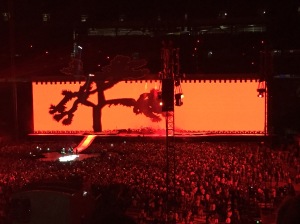 The Joshua Tree is my favorite all-time album. I fell in love with it during my very first heartbreak. I had gone to the desert to escape and my jet-lagged body walked the streets of Palm Springs with my headphones in place and Walkman in hand. It was magical. I’ve never heard that record without feeling a tide of emotion and the opportunity to see it performed was undeniable. I re-upped my fan club membership and dropped a bunch of money for tickets.

The Lumineers opened and were just fantastic. Our seats were directly across from the stage and the sound was incredible. The temperature was ideal and the tequila buzz was delicious. All systems were go. The message of the night began with a huge display of rolling poems, sobering and inspirational all at once. The huge speakers started to crank out the Waterboy’s The Whole of the Moon and a piece of my mind was blown away. Unimaginable joy.

When the band came out is was, as always for me, like church with the Pope officiating. I feel their music in every part of my physical body. Without question, I am Irish and flawed and optimistic and sad and filled with compassion and hope. There’s no other way to describe it. My favorite songs of the night were the ones I’ve never heard live before – Red Hill Mining Town and One Tree Hill with another nugget, Running to Stand Still, that is my ultimate favorite U2 song. So tasty, so mind blowing.

I don’t know if I’ll ever see them again, but I’ll never forget the times that I have. I hope everyone reading this has been fortunate enough to connect and be moved by music or art or some other undeniable external force. It’s magic. It’s what makes life glorious.