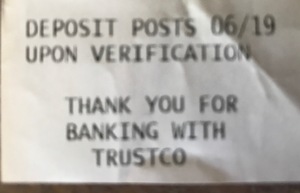 Looking over the business checking account the other day, I noticed something weird. Apparently, I’d been dinged with a $36 insufficient funds charge. I was more than a little surprised since the charge was levied on Tuesday, June 20 and I had deposited a substantial certified check, via the ATM, on 6/17.

I find myself using the ATM quite a bit these days. It’s like banking on your own hours and it’s really convenient. When I made that particular deposit, the slip I received quite clearly said “deposit posts on 6/19.” When I followed up with the branch, I was given an explanation that kind of feels like bullshit, but maybe you can help me understand?

Here’s what I was told: the ATM clearly says that deposits post on the next business day. Now, if I made a deposit on Saturday the 17th, in my mind the next business day is Monday the 19th. Well, that’s not how Trustco (and maybe every other bank in the universe) sees things. Saturday’s transactions actually get credited on Tuesday. So, even though the slip says “deposit posts on 6/19,” they meant 6/20, which is the day that the bank elected to charge $36 prior to crediting that $10,000+ deposit.

Is it really any wonder that people seem to be moving to credit unions?

Ultimately, I was able to have the charge reversed, but I didn’t like feeling as if Trustco was doing me a favor. In fact, I kind of think I’m doing them a favor with my 5 accounts and mortgage.

One thought on “Define “next business day,” Trustco”