Two of my sons are big history buffs. When we travel, more often than not, we visit places steeped in history, particularly 20th century wars. Our most recent trip earlier this month continued that tradition and we took in some intense WW II history in (or near) each city we visited. It’s always a speech robbing experience, which is why I’m only finding the words two weeks after we paid our respects at the first of our stops, Dachau. 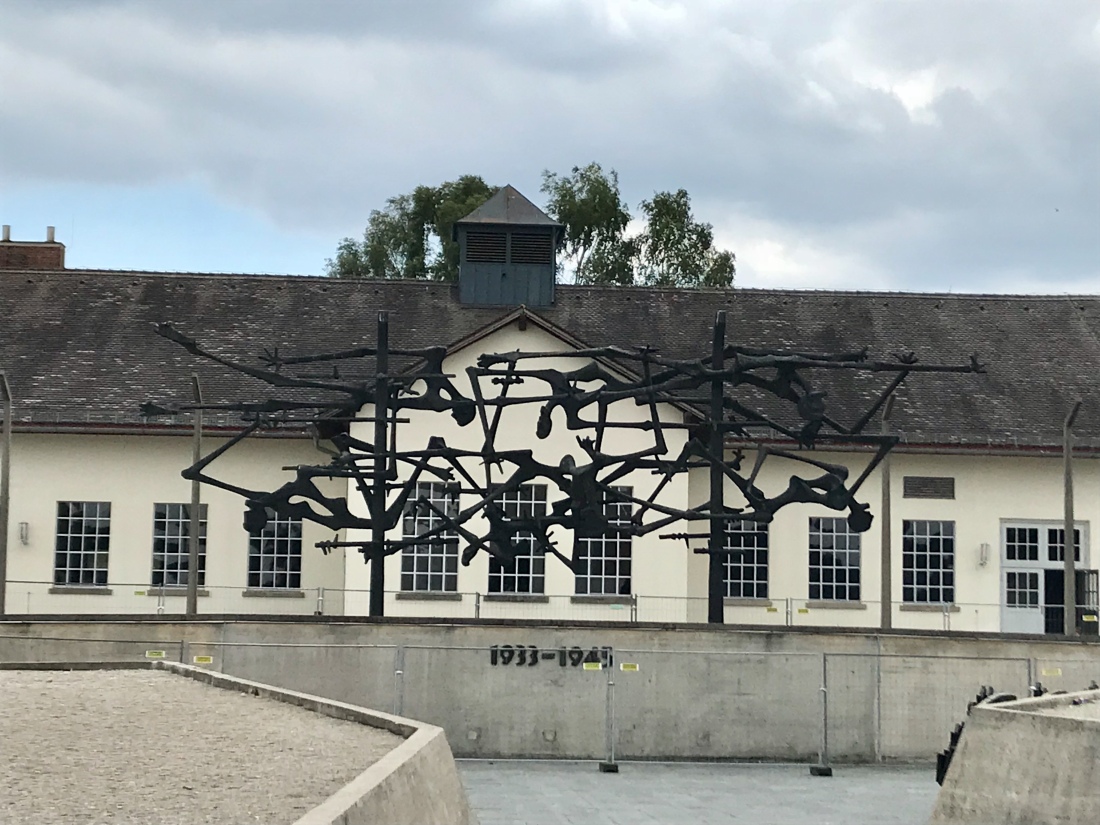 I’ve been fortunate enough to visit Normandy, the Ardennes Forest, Nuremberg and Anne Frank’s house and have seen things that are beyond my comprehension in terms of hatred and heroism. Dachau, though, was a whole nother level, as it was designed to be as the first and model example of a concentration camp.

Visiting Dachau is really easy, in terms of transportation, from Munich. It was a train and a bus all on the same ticket. The bus was packed with students and groups, but we wedged our way onto the first one and arrived at the camp in time to get in on one of the day’s English tours, scheduled to last approximately 3 hours.

Our guide was terrific – thorough, knowledgeable and a resident of the area whose own grandfather had been punished with a sentence at Dachau, yet survived to never talk about what he witnessed or was subjected to. He didn’t want to risk going back. Despite his Opa’s reticence about discussing his time imprisoned, our guide’s repeated use of the word “murderous,” revealed his deep understanding of the grounds we walked.

The tour physically moved us from where the trains would arrive to the processing building, which offered displays and photographs to visually recreate what occurred in which area. The sleeping barracks were replicas, tidy and clean in a way that they never could have  been with hundreds of humans denied every basic need. It was horrific. The toilet and wash room bearing the load of so many…

We toured a building which was the prison within a prison. Individual cells with perhaps a toilet, maybe not, and heavy wooden door with wrought iron bars. I couldn’t decide if it was better or worse than the chaos of the general barracks, but I imagine the lack of nourishment and the addition of regular beatings and other abuses probably swayed things to being worse, if that’s even imaginable.

It was a heavy day but, just like the large groups of German children who were there as a required component of their curriculum, it felt compulsory to me. If you’re in that area, I recommend a guided tour (minimal cost) and a walk around the small city of Dachau, if you can manage it. We didn’t have time but I would have been interested to see some of the city. It would have been nice to get a different definition for a quaintly pretty city that has been synonymous with death for decades.