Going to the bathroom in Greece

Before I came to Greece I imagined it, in all honesty, as kind of dirty. I don’t know why that was my impression, but I kind of pictured it as sort of casually maintained. Maybe it comes from being raised by a German who presented my brother and I with our own shoe shining kits when we were in primary school. Who knows?

Well, I couldn’t have been more wrong. The cleanliness of Greece puts America to shame. Streets and sidewalks are regularly swept and even mopped. There isn’t garbage or trash strewn about and things are just plain tidy. But, the bathroom customs are a tad different, in case you are as unaware as I was until recently…

In Greece, toilet paper is not deposited in the bowl when one is finished with it. Instead, there are closed bins next to toilet in which you toss your used tissue. Kind of gross, in a way, but practical because the waste pipes are apparently much smaller than those in the States. I certainly didn’t want to be responsible for backing up a toilet and it became increasingly more routine for me to abide by the local customs as the days went on.

Picture for a moment what you might encounter in a public restroom in the States, maybe in a restaurant. Often something essential is missing – toilet paper, hand soap, or perhaps the means to dry your hands. Or perhaps the stall is simply filthy with the smell of urine, or worse, assaulting your senses when you enter the bathroom. In Greece, on three islands and in Athens, that was a situation I never encountered. Not once.

Now, take this to another level and consider the state of the bathrooms you may have needed to make use of at a beach…In my experience, they are generally pretty damn gross. Take that dirty, smelly situation as described above and add sand to it. A lot of sand. Everywhere. Now, look at the photo below. That is a bathroom at a beach taverna where we enjoyed lunch in between naps on the sun beds and swims in the Mediterranean. Immaculate. 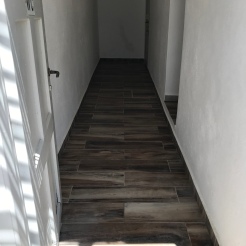 Here’s another example from the Blue Star Ferry between Paros and Athens. While there was a stall out of order, there were plentiful options of which to make use, the bowls, sinks and floors were clean and there were real glass mirrors and hand dryers that functioned. Amazing. 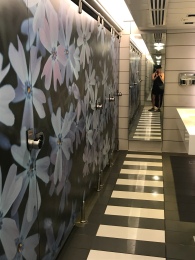 We can learn more than a couple of things from the Greeks – their deftness with phyllo and the use of oregano when cooking and how to create a beautiful, unique village despite every house being painted white. Maybe we could just start, though, with bathroom maintenance?