Sunday evening I trucked it up to Saratoga to see Tom Petty and the Heartbreakers.  Believe me, the drive did not compare to the time a group of us traveled via bus and maybe (?) train from groovy Greenwood Lake to the Nassau Coliseum to see the very same band.  Yep, I’m an old school TP fan and I’ll always have a special place in my heart for these guys since they were my first arena rock and roll show – 1981, Brendan Byrne Arena.

As always, the band played with heart and humor.  Tom Petty made just the right amount of anecdotal commentary with the crowd and played a great mix of old and new(er) tunes.  As expected, he closed with American Girl, a song which remains a favorite of mine despite the whole Silence of the Lambs connection.  His lyrics aren’t often cited as poetic, but he does have a plain directness in speaking which manages to convey emotions pretty effectively.  It was a fun show and my date, who coincidentally (or fatefully?!?) had attended a show from that very same 1981 tour, was the perfect partner for the night’s adventure, an adventure which ultimately ended at the Schenectady County Airport with some gawking at Tom Petty’s private jet. 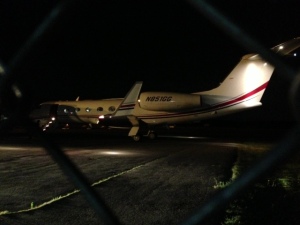 Sounds like an awesome night, yes?  Well, let me share a couple of my complaints with you…

The ticket prices were outrageous. $50 for a lawn seat is pretty damn obscene when you’re spending your night breathing in secondhand tobacco smoke and dodging drunks who are literally falling down.  It seems there’s no benefit in pricing the tickets high, assuming that’s an effort to keep the riffraff out.  Maybe not over-serving the crowd would be a good idea?  It is rather remarkable that folks manage to get so totally inebriated when beers are priced between $9-12 each.  I suppose one might as well drink alcohol because paying $4.50 for a 20 oz bottle of Dasani water is no bargain.  If you get drunk enough, you would have a hope of forgetting where all your hard-earned money went, I guess.  I realize that my first concert was a long time ago, but the price of tickets and refreshments (don’t get me started on the merch!) certainly seems out of whack with the general state of inflation.

Come on, SPAC/Live Nation give me a break – otherwise you won’t be seeing this face in the crowd.