Last night my soccer playing middle son and I went down to Wolff’s Biergarten to take in the women’s World Cup semi-final game. It was a great match up – #1 ranked Germany vs #2 USA and we, along with the majority of those present, were thrilled when our women were victorious with a final score of 2-0.

The bar was packed and the roars of the crowd were deafening. It was fantastic. There were so many familiar faces and it took both hands to count the number of former students who were present. Time does move on, doesn’t it? 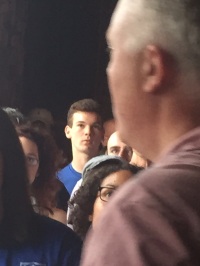 The last time our women’s team won the World Cup was 1999, the same year my middle son was born. I remember we were in Harwich Port, MA and had the game on the little television set which was in our bed and breakfast. My oldest son was two and was completely captivated by the post-game excitement emanating from that small TV perched atop the mini fridge. It was unforgettable.

If England beats Japan tonight, Sunday’s final, a USA v England match on Independence weekend promises to be epic. I hope to be with both of my big guys, Liam the Anglophile and Griffin the baby born in our last winning year, at the Biergarten. Maybe I’ll see you there!