After spending a couple of hours becoming familiar with Salzburg’s historic and beautiful city center, I returned to the flat and collected my son. There was so much more to experience! We didn’t really have a plan, but I wanted him to see this picturesque city and there seemed to be plenty with which to keep ourselves occupied without the need for an itinerary.

We traced my earlier footsteps and went along the river where vendors were set up displaying and selling their artwork, artisanal food items, clothing, jewelry and crafts. While there was nothing that I was interested in enough to commit to carrying it home, there were lovely items available and the quality definitely seemed high. Continuing past the market, I shepherded Liam to the tourist office so he could collect brochures and, after some consultation, we decided that the funicular to the Fortress Hohensalzburg was a must do. Twenty minutes, and about 22 euro, later we were on top of the city.

The views as we walked up to the castle were fabulous and as we went by the cafe’s terrace an open table near the vista beckoned. Sitting there in the sun sipping on a glass of gruner veltliner was a perfect moment that I hope to never forget. The castle itself, open since 1077, was great. The video presentation which told the history of the fort was really well done and the artifacts and limited furnishings were tremendous. The torture devices on display were interesting, but, for me, it was all about the view. 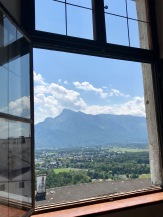 We walked down to the city center rather than taking the funicular again, and sought out a spot for lunch. I had a craving for trout and we came across Restaurant Elefant that offered a wonderful seasonal preparation with a simple brown butter and chanterelle mushrooms. It was really fantastic, perfectly cooked and fresh as hell, as was the simple green salad that I had also ordered. We finished with a local speciality that Liam had noticed, the Salzburger Nockerl, a raspberry and meringue dessert that was massive, yet fairly light. We were unable to finish it, but I’m glad we splurged on something we had never before tried.

It was about 4:30 when we finished lunch and I was ready for a nap or another glass of wine. Since I wanted to run that evening, I went with the first option. Liam was interested in a Mozart musical thing that began at 8:00, so we returned to the flat where I settled in for a power nap and he relaxed a short while before leaving solo to see his performance.

My run is a whole ‘nother post, mostly just visual, but just to give you an example of why I am so smitten with this city, I’ll tell you this – as I was running back north after covering a few miles on the east side of the river, who did I literally run into? My son. How crazy is that? I paused to chat with him for a moment and we made a plan to meet after I showered. I ran the rest of the way home with a huge smile on my face and anticipation for yet another round of gelato. How can I not love this place?