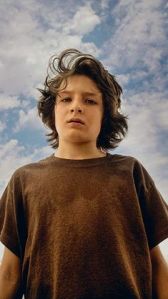 For pretty much the first time in this century, I’m not working two jobs and weekends really feel different. Saturdays sure do change when one doesn’t have to be at work at four or five in the afternoon and I’ve spent recent Saturdays swapping seasons in my closet, raking out my front garden, changing drapes, and generally puttering around my house – oh! And going to the movies.

Last week was A Star is Born and yesterday was the new Jonah Hill directed film Mid90s.  Unlike last week’s flick, this week’s came with an unfamiliar story and a cast unknown to me. I had seen the trailer once, or maybe twice, and had been interested. Maybe it was my “boy mom” tendencies kicking in or something. Whatever the reason for the movie’s appeal, middle son and I went to the Spectrum for an early matinee and, following the showing, both walked out pleased with what we had experienced.

The semi-autobiographical film tells the story of Stevie, his difficult to witness relationship with his brother, and how far he is willing to go to be part of a group which will provide him with a sense of belonging not present in his home. Stevie, later dubbed “Sunburn,” seems to be seeking someone whom he can freely admire and look up to, unlike his wildly violent brother or his mother who can not seem understand, much less create, the appropriate boundaries between mother and child. I guess you could say a family.

The awkwardness of Stevie as he begins interacting with a close-knit crew of skateboarders is cringe-y and reads to this middle school teacher as completely believable. Stevie is about the age of my own youngest son, (whom I sincerely hope is years away from the types of experiences in which we see Stevie partake), and his willingness to swallow everything he sees, hears, and eventually, is offered, is difficult to watch at times.

G, my most fashion aware and obsessed son, was impressed with the on point cultural references and style of the film. The magazines, music, wardrobe and language was spot on for the era. The scenes of physical violence, sexual explorations, and drug and alcohol experimentation were particularly challenging for me to sit through, but I’m glad I did if only to get to this piece of dialogue spoken by Na-Kel Smith’s character, Ray, to Stevie:

‘You take the hardest hits out of anyone I know. You know you don’t have to do that, right?’

There had been a couple of moments during the movie that had already made me gasp, but those particular lines also caused my eyes to immediately fill with tears. Wow. If that message could only be directly delivered and received by people who believe that the hard way is the only way, our world would be a much more kind and gentle place to live.

Have you seen Mid90s? I’ve heard some really negative impressions of the film and am interested to hear what other people may have thought. Please share your thoughts and perspective with a comment.

One thought on “Saturday afternoon in the Mid90s”