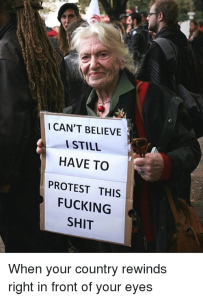 I am so tired of the abortion debate. Not like too exhausted to continue to fight for women to have control of their own reproductive choices. No, that isn’t it at all. I mean, like so weary of having to argue with people who believe that they have the authority to dictate what any woman can do with her body. The kind of tired that makes a person angry and liable to snap. Like hangry on a massive dose of steroids. Yeah, like that.

To me, taking responsibility for an unintended pregnancy as a teenager meant terminating because I knew I wasn’t responsible enough to care for a child. I had no education, no career and no partner with whom I wanted to raise a child. My life style then was far less moderate than my current one and the pregnancy, as I said, was unplanned. That eventual child would not have been provided with its best start and caring for a infant, with potential birth defects, certainly would have been far beyond my capabilities as a high school student. My choice was the best one in my situation.

It was no body’s* business but my own, and only my soul, if there’s such a thing, will bear the scars of my choice. Just like it’s my body, it’s my karma or damnation. It has nothing to do with you, so don’t try to make it your business.

It’s not about YOU or God. Not everything is.

I’ve never claimed to not wonder, or think, about what that embryo may have grown to become. I’ve always been convinced that the aborted baby was a girl and, after being fortunate enough to birth three sons, I’m ok with the universe fucking with me like that. That being said, I have zero regret about my decision and I truly believe that the energy that was gathering cells together within my body, went somewhere else in the universe. I don’t think it’s a coincidence that I have a close female friend who is essentially the same age my child would be and I appreciate that her own mother was in a position to welcome her into the world in a way that I could not. She is a gift.

So, while I’m more than tired of hypocritical politicians, men who seek to exert control over a woman’s reproductive decisions and people who care more about the life of an unborn child than they do of one that is living in horrendous conditions, I will not ever rest on this issue. Promise.

One thought on “Alabama getaway”