This summer is flying by, don’t you think? I can’t believe it’s been almost three weeks since I got back from Greece. It some ways it feels like forever ago that we were there, however, I’m still successfully mentally resurrecting the sense of pleasure I felt being there just by closing my eyes. That country definitely is staying with me.

I’ve been to a fair number of European countries over the years, but there’s something about Greece that really rang a bell for me. It was effortlessly beautiful with blue skies, bright perennial flowers and white washed buildings. The hills were arid and reminded me of the mountain in Palm Springs, another favorite place for me. The ocean was everywhere. My eyes simply never grew tired of the sights before them.

The Greek people are wonderful, gracious with their use of English and seemingly always interested in providing hospitality that goes a little beyond the expectation. After nearly every Taverna dinner we were provided with some small treat – a scoop of ice cream, a shot glass of a local liqueur or hunks of watermelon. After a life changing* bowl of chick peas that had been slow cooked in a bath of olive oil, onions and salt, I was given a bowl of watermelon tasting ever so slightly of the garlic cut with the same knife. My satisfaction with the meal could not have been greater.

Returning to a particular island has occupied my thoughts since I got back home – Paros, the last of the three islands we visited. The reasons for the fondness I have for this place are purely emotional. I felt very comfortable there. The island isn’t too big, the towns are picturesque without being fussy and the food and drink both stellar. There were also two things that occurred that gave me a sign from the universe that I was in a good place, the right place even.

The first was when son and I travelled to a different town on the island, Naoussa, which was to the north of Parikia where we were staying. It was late morning when we arrived on the bus and walked through the village on our way to finding a beach. Imagine my surprise to hear someone seated at a sidewalk cafe calling my name. It was a group with whom we had enjoyed the previous evening’s Farm to Table feast down island and now here they were! How random is that?! 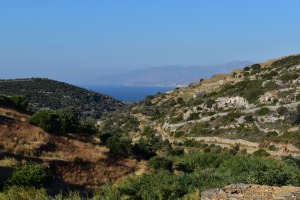 The second affirmation came on the bus. I had purchased tickets for my son and I for a particular destination from which we would take a hike. He decided prior to departure that he didn’t care to go, so I went solo. As the bus driver’s helper came down the aisle to collect tickets, it turned out the beauty rich, but euro poor, young woman seated behind me did not have the necessary fare for her ride. I was able to offer her my extra ticket which turned out to be exactly what she needed. The smiles exchanged between she, the bus employee and myself could have lit up a room. It was a simple, happy moment.

I’m going to figure out how to get to Paros again and create some more of those. We all need simple, happy moments, right?

One thought on “Still swept away by Greece”