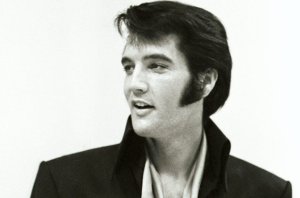 I can’t say that Elvis was my very first crush (Tom Jones holds that honor), but he was the first performer whose albums I owned and played incessantly. My mother would order them for me from commercials on television and I would wait impatiently for the UPS guy to deliver the records to my house weeks later. The haste of Amazon Prime was unimaginable in the 70s.

The best weeks of the year, from a television viewing perspective, were the ones in which the 4:30 movie  featured Elvis movies like Blue Hawaii and Viva Las Vegas. Even as a kid I knew the quality of these movies was suspect, but they were just so damn fun to watch that it didn’t even matter.

August 16, 1977, the day Elvis died, is a day I’ll never forget. I was in Long Island at a shopping center that had outdoor speakers broadcasting a radio station playing pop music. There was an interruption in the programming and a man’s voice announced the shocking news that Elvis Presley was dead.

It was my first rock and roll heartbreak.

Had Elvis lived, he would now be 85 years old. On Saturday night the Hangar on the Hudson in Troy is hosting a birthday party to celebrate the King of Rock and Roll. Johnny Rabb, the Tichy Boys and other special guests will be performing in what promises to be an epic party in the King’s honor. My dancing shoes might not be blue suede, but they’ll be on my feet nonetheless.