Well, I survived it sore, but generally unscathed.  Actually, I finished a respectable 10th out of 46 in my age bracket, which is nothing to be ashamed of, I suppose.  But…

…it was really hard!  Here’s the blow-by-blow:  My wave took off at 10:35 from a different starting line than last year’s spot on State Street between the ESP and Capitol.  For 2014 we began (and finished) inside the Times Union Center, which meant that the first .75 of a mile was unrelentingly uphill.  Did I mention it was hot out and that I much prefer to run late in the evening in the dark? Yeah, that.

I muscled my way up the hill, carefully tracking who passed me and who I went by.  It wasn’t a big number in either case, but I quickly lost the ability to count anything much beyond how much further it would be until I crossed the finish line.  The first obstacles were closely spaced hurdles, which, incidentally really take the wind out of a person.  While plenty of folks did a slow step over them, you know me, I leaped like a semi-graceful deer over them quickly burning my lungs in the process.

After finally reaching Madison Ave, there was a bit of a reprieve from the leaps and hills and I enjoyed a little downhill action.  I hit the first water station and reinvigorated myself enough for the next task – carrying a sand bag up and down a bunch of steps.  The subsequent obstacles came fairly quickly and I shimmied and crawled and grunted my way through them.  There was more of the same with monkey bars to swing across and huge heavy tires to move with my favorite challenges still to come within the arena.  Within the arena – doesn’t that sound so gladiatoress? 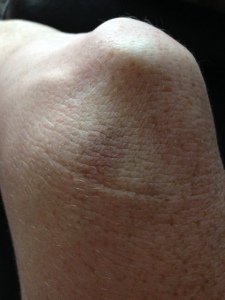 See that bruise there? I earned that!

I began keeping track again of whom I was able to go around, feeling particularly gleeful when it was a man.  That minor in Women’s Studies sometimes aligns beautifully with the competitive streak I normally keep in check.  I loved the knotted rope climb, despite the injured dude on the ground in front of two of the possible ropes choices, and the wall clamber and net were awesome – so fun!  The stairs and the stairs and the stairs were dizzying, but I prevailed and clocked in with an official time of 41:33, finishing 192nd of 517. Not too shabby.  How about you?  Did any of you take part in the fun and games?