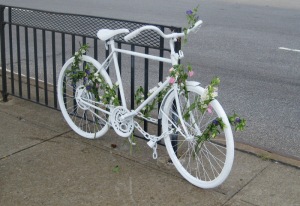 Now that summer has arrived, I’ve been riding my bicycle to the restaurant a couple of nights a week. I love so much about my less-than-two-mile commute – the fresh air, the exercise, the view, the sense of being more closely connected to the street I live off of and work on…it’s pretty great. Except, of course for the cars. That part kind of sucks.

I’m most afraid of the parked cars I ride past. Does that surprise you? The way I see it, the cars coming from behind me are looking ahead and should be able to see (and avoid) me, but the folks who might be opening their car doors aren’t necessarily checking behind them before they throw their doors open. That’s why they scare me.

A couple of weeks ago I left Lark + Lily, helmet on and rear of my bike red light flashing, and headed home. A few blocks from the restaurant, a woman slowed down as she drove past me and shouted, “You’d better get that bike off the road.” Two blocks later, as we both waited for the red light to change, I retorted, “You’d better get familiar with the law.” My ride didn’t improve.

As we each rode down Delaware Avenue, the “conversation” was ongoing. She continued to yell at me in an attempt to convince me that I wasn’t entitled to ride on the road and I persisted in trying to educate her about traffic laws. Hey, what can I say? I’m a teacher. She finally drove away and I mulled over the wisdom of engaging an ignorant driver. I concluded that it probably wasn’t my finest moment.

Yesterday evening I got some news that confirmed that I should probably refrain from responding to drivers who either do not know or simply refuse to abide by the existing motor vehicle laws. It isn’t my story to tell, but essentially, someone I know was hit by a car while he was commuting home. Intentionally. The driver of the car initiated the interaction by cutting off the cyclist, who astutely snapped a photo of the car and its license plate, and then followed up three blocks later by directly and purposefully hitting him. No joke.  Yes, the driver of the car deliberately drove his vehicle and hit a man who was just riding home.

I think there needs to be some serious intervention and education about cycling in this city before anymore riders get injured or worse.