A number of years ago my friend, Paul, turned me on to almond croissants and my world became a sweeter place. I think there were three in the box he originally brought to my house. I know I wished there were more. On Paul’s advice, prior to stuffing my face, I placed my croissant in the microwave for about 15 seconds which made it a touch softer and unbelievably flaky. I was immediately a fan and have sampled almond croissants from a number of different bakeries, both local and abroad.*

Last weekend I pedaled to the Troy Farmer’s Market to earn my anticipated calorie splurge. You see, I had a plan – a taste off between Mrs. London’s and The Placid Baker’s versions of almond croissant. But, before I share my impressions, let me tell what I learned from the interwebs about almond croissant. Maybe you already know this, but I was surprised to learn that almond croissants originated as a thrifty way of repurposing regular croissant. The shelf life of a croissant is ever so brief, but if one slices them in half and spreads them with an almond paste or custard known as frangipane and then dusts them with powdered sugar and sliced almonds and pops them in the oven for a second baking, well, that’s a whole new pastry. Damn, those French are smart when it comes to tasty baked goods!

So – here’s the Mrs. London’s version…

It’s huge, but you’ll still wish there was even more.  The somewhat terse man was kind enough to toss some stray broken off pieces when he bagged my two croissants ($4.25 each) which was a welcome treat. The dusting of powdered sugar was kind of sparse, but keep in mind that I had the bakery bag in my saddlebags on my bicycle for 10 miles or so. The frangipane was thick in consistency, but thinly layered and the croissant itself was flaky but not incredibly airy. Taste? Delicious, but a bit sweet, said my 11 year-old.

To score an almond croissant from The Placid Baker, I had to venture beyond the Farmer’s Market to get to the source. You see, they’d sold out at the market but still had a couple available at the shop. Here’s the one ($3.00) I brought home. 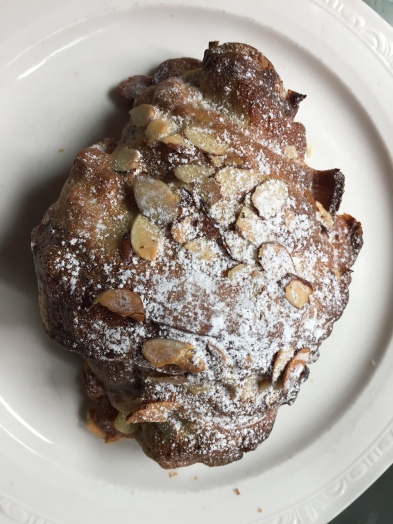 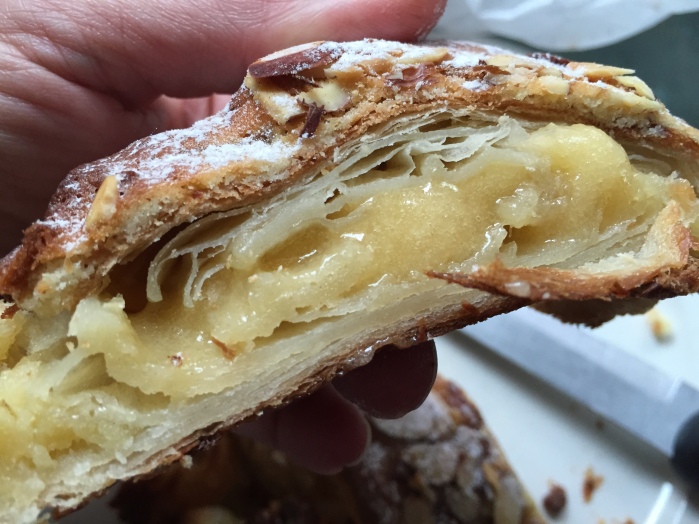 It was a tad smaller than Mrs. London’s and definitely baked to a darker shade. The real surprise, though, was the generous layer of frangipane. It was a much “looser” version of frangipane, dripping onto the plate when I bit into it. Despite the abundance of almond custard, this croissant was less sweet and somehow lighter than the Mrs. London’s version. The pastry layers were well separated and excruciatingly light. C’est Bon!

Bottom line – they’re both terrific, but The Placid Baker has stolen my heart from Mrs. London. How about you? Do you have a preference?