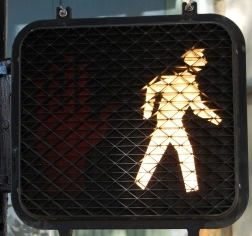 Whenever someone says to me “I have a weird question,” I always interrupt and tell them that I hope they don’t disappoint me. If you say it’s going to be weird, please let it be so. Now that I’ve preset you for weirdness, let me tell you what happened yesterday during my run…

I was about 3 miles in as I approached the intersection of New Scotland Avenue and South Manning Blvd. The light was green, which prevented me from immediately crossing the street, so I took a moment to stretch, something I’ve done in this very same spot countless times. Because my hips and glutes are where I need the most attention, my technique is as follows: place my hands around a nearby pole, clasp them together and then kind of sit back into an almost a seated position, sort of making my body into an upside down L. 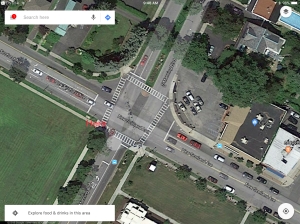 Well, imagine my surprise when, as I settled into my stretch, the pole I was holding onto snapped at the base and fell towards me! I swear I don’t know what prevented me from getting seriously injured by the heavy metal post as it came at me. Somehow I moved my body to the left just in time and the post barely grazed my right shoulder and hand before it hit the ground. Holy crap.

I looked at the base where the pole had snapped and there was an irregular line completely around the base where it had broken. I like to think of myself as strong, but, seriously? I can’t claim to have used brute strength to snap a metal pole – no way. A woman who witnessed what had happened, called out from her van checking to make certain that I was ok. I was. I am. She agreed that I should call 911 to share what had happened, which I did. I told the person who answered my call that I had something weird to tell them.