I recommend this version of Stormy Weather, if you want to go multi sensory with this.

While I’ve been relishing the languid pace of this hot summer, with the added bonus drama of a spate of recent storms, sh*t has gotten real to folks in my immediate and extended neighborhoods. Last Friday, the rain came down in a textbook example of “deluge” and the infrastructure in our aging city just can’t bear it. Numerous homes on my block, and the neighboring streets, experienced a pretty gross example of that when their basements filled with inches of disgusting water from the overtaxed system. Nasty stuff that they’re still cleaning up nearly a week later. Ick. 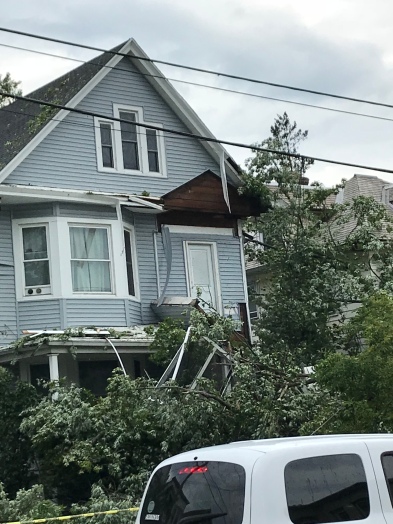 Yesterday’s round of afternoon storms was wildly intense with pelting rain, fierce winds and chunks of hail pinging against my house. After it passed, I walked to our farmers market and was shocked by the destruction I saw. There were trees down and streets closed and Delaware Avenue, during rush hour, was very slow moving. The most shocking sight on my walk was the enormous tree down on Delaware and the resulting damage to at least two homes. The roots had just pulled out from the sodden ground and down it went.

This morning, Jeter and I took a walk to see how the clean up was going. It was obvious that a lot of work had been done overnight to cut up and cart away limbs and entire trees, but what was even more obvious was how much destruction had actually occurred. We walked Delaware to Beekman to Southern Blvd and I couldn’t get over how many times we had to walk in the street because there was a pile of branches monopolizing the entire sidewalk. Traffic was weird because streets were still closed and news trucks were setting up for their broadcasts. Pretty crazy.

I hope you all made it through unscathed and, for those that didn’t, I wish you well and hope you receive a fair insurance settlement. And, if you’re a renter, make sure you spring for renter’s insurance. You just never know.

One thought on “Stormy weather”