Baking with Kate – an Airbnb experience

Airbnb has been my got-to for accommodations abroad for the last 4 or 5 years, I’d say. Basically, if I’m going to spend more than two nights somewhere, I want to have the amenities that make a stay feel more like a home – kitchen facilities, perhaps or lounging space when I’m traveling with friends or family. I don’t recall ever having a bad experience with my bookings and really enjoy having a sense of being part of a community rather than a mere tourist. It’s worked so far in Paris, Normandy, Barcelona, Lisbon, Berlin, Vienna, Salzburg, Prague, Galway and Dublin, which is a pretty good run.

In addition to places to stay, Airbnb offers what it calls “Experiences,” and yesterday I took advantage of my first – a baking class outside of central Galway. The class was taught by Kate, an experienced baker and restaurateur, with a focus on brown bread (my favorite) and scones. As I was the only student for the morning, and reliant upon public transport, Kate suggested I come directly to the small, cozy cafe that she owns in a shopping center, rather than her home, only 20 minutes by bus from Galway’s Eyre Square. 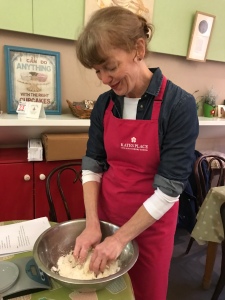 I arrived and easily located her cafe upstairs. Within minutes, I had an apron on and was reading through the recipes which she handily provided. We elected to make half batches of the recipes since I would be taking the goods with me and certainly couldn’t eat more than 6 scones and a loaf of bread over the next few days by myself. We began with the scones, weighing the flour rather than measuring by volume. Side note: I think I need a kitchen scale. After using my hands to gently mix the dry ingredients, Kate asked my preference for cranberries or raisins (the former was my pick) and tossed in a casual handful of full, frozen cranberries. Next in was a combination of cream and beaten egg, lightly mixed in with a wooden spoon. The dough was slightly wet, but when turned out onto a floured surface, it firmed up nicely. I formed a 2” or so thick rectangle of the dough and used a glass to cut my circles, which went onto a baking sheet after a quick brush with the remaining milk/egg mixture. They came out gorgeous and fabulously light. Delicious.

The brown bread was a similar process. Again, hands were used to combine the dry ingredients with a spoon only being used for the final stirs. It’s a quick bread, so it feels more like a batter than a dough, and I correctly gauged that it was a bit too loose. Kate rectified that with an addition of oats and the batter ultimately had the consistency of porridge, or oatmeal as we might say at home. I poured it into a loaf pan and it was given a final kiss of oats on the top prior to going in the oven. The result was fantastic.

After about ninety pleasant minutes of baking, chatting and sipping a coffee, I gathered up my baked goods, now placed in handy sacks, and went on my way back to Dublin. On the bus ride east, I inhaled that bag of treats more than once and was powerless to resist eating another half scone. It was a great first “Experience” and I’ll be enjoying my handiwork for breakfast for the remainder of my time in Ireland.