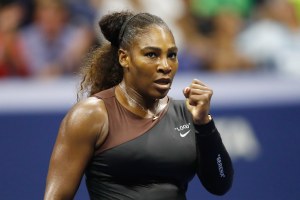 There was a time when I had no interest in watching a tennis match. It was just so boring to me and the scoring made no sense with some points being worth 15 and others 10 and what the hell was advantage and deuce? No, thank you.

But, then I learned how to keep score and began to understand the rules, and there was Andre Agassi, and I was hooked. I no longer minded when big matches were on television and even attended the U.S. Open a number of times and just loved it. What a great game.

During most of my time appreciating tennis, the Williams sisters have been on the scene. I’ve seen both of them play a number of times and even met their Dad, Richard, one year at a match and found him to be approachable and pleasant. While Venus was always the more appealing player to me because of her quiet demeanor, Serena awed me. Her strength is remarkable and she plays, like all my favorite players, with her heart pinned to her sleeve. She can be confrontational and combative, but damn it, she is a warrior.

There’s been a lot of talk about the number (23) of Grand Slams which Serena has won and the record (24) being within her reach. I personally don’t know if it is Serena’s goal to match or beat Margaret Court’s achievement, but if it is and she’s feeling disappointed or frustrated after losing in last night’s final to a woman half her age, I’d like to offer her some advice.

Goals can be motivating and provide focus. It can certainly be positive to have a target for which to aim. Training and practice can be grueling and keeping an eye on the prize can provide the inspiration necessary to keep one going.

Earlier this year, I decided that I wanted to run 1,000 miles this year, a feat I accomplished a couple of years ago. I also declared that I’d like to run 25 half marathons before I turn 55 in 2021, feasible with a dozen under my belt already. Both of these goals were achievable, I thought.

But, then my body started to complain. My feet hurt and the first few days of my vacation were remarkable for the limp I had related to discomfort in my hips. It was painful to walk, which made running impossible, and I essentially took the entire summer off running a total of 8 miles in two months. I watched my goals get away and was left feeling badly about my perceived failure.

I’ve gained a little perspective, though and have come to appreciate that not every goal is meant to be achieved. Life, babies and physical limitations can get in the way and demand our attention at times. Honoring our bodies and treating them with respect is essential for our long term health and wellness and that’s the most important end result to me. When it comes to goals, sometimes, you’ve just got to let that shit go.