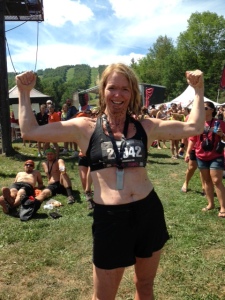 Yesterday, I mastered my third consecutive Warrior Dash down in Windham.  How was it, you ask? Well…it was really hard – maybe the hardest one yet, for me.

A beautiful foggy early morning had turned into a sunny and bright late morning and the temperature had somehow crept up into the 80s.  When I jumped into the second half of the 10:30 “wave,” I faced the mountain with mixed feelings of excitement and dread.  I may have fallen in love with skiing recently, but it really is far more fun to glide down the mountain than run up it, know what I mean?

The course had a certain Disney-esque quality with cleverly constructed trails which did not reveal the full extent of the climb.  There were two occasions when I was convinced that the “up” part surely must be done and the “down” portion was all there was left to complete.  I was wrong.

The obstacles were challenging without being particularly difficult.  I wouldn’t be able to recollect the exact order of the various walls, wire and water hurdles.  There were a couple I would have liked a chance to do over and I can tell you that the walls were my favorite, especially the one with the knotted rope.  I seriously came off of that wall, looked at the guy next to me and roared “I dominated that wall!” Yes, really.

When I finished the race, sneakers saturated, clothing filled with twigs and stained clay red, I was predictably elated.  I tried to itemize the obstacles, along with my bruises, and realized the chronology of the race really didn’t matter. Just like the challenges which are presented by life, getting through them is the most important part.  While some would have indeed benefitted from a repeated attempt or a change in approach, having the ability to smile when it’s all over?  Winning.

*Check out the Seen gallery here!