I don’t know about you, but I grew up believing that “pancake” syrup was all there was to drown my pancakes in. Based upon my middle son’s recent query about “Why is the number one ingredient in maple syrup water?,” I have to think that more must be done to educate children about the difference between pancake syrup and genuine maple syrup. Maple Weekend 2014 provided the ideal opportunity for a little lesson on the genuine article vs. that water-based, artificially colored and flavored bastardization known as “pancake syrup.” 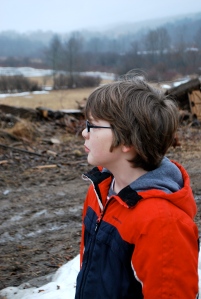 Last weekend, on a damp and cold morning, Quinn and I headed out to Berne to see the trees from which our syrup comes. The drive was full of sights for us to observe – cows and horses, heaps of lingering snow, raging creeks, and to discuss and, in case you were wondering, that boy has no interest in living in the country. Definitely a city kid.

We arrived at Mountain Winds Maple Farm in the late morning. While we weren’t the only folks visiting, Randy made time to take us on a little tour. Our footwear choice (rubber boots) was validated by the squishy earth and we confidently headed towards the little pumping station. This was where the tubing, working with a vacuum pump, initially collected the surprisingly clear and remarkably not sweet sap. 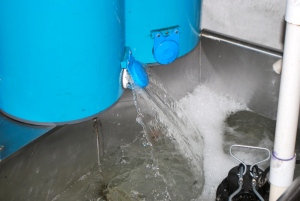 Randy explained that the yield has thus far this season been very low since we have not yet had a true thaw to encourage a free flow of sap. Fingers crossed, a few days later that he and the other syrup producers are seeing a more impressive run as the temperatures have somewhat moderated.

From this first collection point the sap is sent to be boiled down, changing the percentage of sugar from approximately 2% to a more familiar 60+%. The rich amber color also develops as the syrup is concentrated and caramelized. 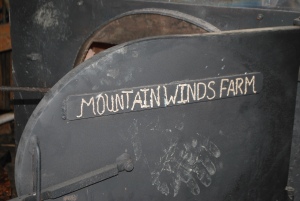 We were lucky enough to nab his last gallon of syrup and have stashed it away in the basement as back up for the gallon we’re currently enjoying. In the DelSo, I use 100% pure maple syrup, preferably extra dark. I buy this delicious liquid, 2-3 times a year, by the gallon. It’s an investment at approximately $55, but buying in bulk definitely makes sense for my household where we eat pancakes or waffles or French toast at least weekly. In addition to this standard use of maple syrup, I frequently find myself reaching for the syrup dispenser to add flavor to root vegetables and other savory items. Delicious! 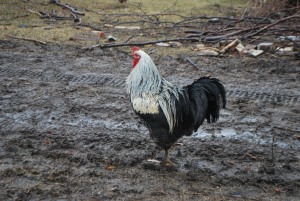 When it is time for some more amber sweetness, we have options other than hauling out to Berne. Randy vends at the Bethlehem Farmers’ Market and also distributes through Farmie Market. In addition to syrup and syrup related products (cotton candy, syrup straws, hard candies, etc), he also sells farm eggs and fresh chicken.