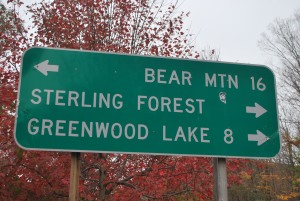 When I think back to my teen years two things stand out distinctly – and I’m not talking about sex and cheap beer.  No, in the small town where I grew up, a place with limited transportation options and even fewer entertainment opportunities, cruising (or walking) around listening to the radio (or cassettes) was our recreational past time. During my recent visit home, I discovered the familiarity I once had with the roads, be it on my two feet or four wheels, remains.

Decades have passed since I last resided in Greenwood Lake, yet the curves of the road continue to be as familiar to me as my own hand.  I consciously approached the village from the east.  I wanted to go over the mountain, the same mountain I had walked, hitchhiked and driven for years.  While there have been some changes along the side of the road, particularly in Sterling Forest, the twisting and curving path of that black ribbon snaking through the woods and between rocks, hasn’t changed.

Driving over the mountain flooded me with memories.  There was a fogged in night when my mother managed to negotiate the road with an open driver’s side door and the assistance of the double yellow line.  I remember a late night return from work in a blinding snowstorm which caused my coworker (who was driving) to slide off the road and into a ditch.  We were eventually rescued by a passerby whom we rewarded with bags of candy pilfered from the gift shop on the thruway rest stop where we worked.

At the top of the mountain there used to be a pull off spot to take in the view – and hang out partying.  We used to claim that on a clear night the lights from NYC’s skyline were visible from that vantage point.  I still like to think that they were.  One of my most vivid recollections is from a wild night of drinking with a large group of people from town.  When it was time to head back down the mountain, one of the guys decided he didn’t want to be in the car, he wanted to be on top of the car.  I watched in horror, from the car immediately behind, as he climbed out of the moving vehicle and stretched his body long, arms extended, gripping the lip of the roof while traveling 50+ mph down the narrow and winding road.  While he survived that escapade, he died from a self-inflicted gunshot a few short years later.  In retrospect, maybe he was trying to kill himself even then.

I turned off the mountain prior to approaching the village.  I wanted to drive down a different road, one I had frequently taken when I was in the mood to walk instead of hitchhike.  It was a good decision.  I was pleased to see that the area had remained essentially free of development and that the trees which stood vigil beside the road remained the most prevalent residents.  I wondered who else might remember the year those same trees were devastated by gypsy moth caterpillars, the sound of the leaves being munched impossible to drown out even with my Walkman blasting Van Halen’s Eruption.

In my head, I can still hear both.

2 thoughts on “The road remains the same”