Yes, RLJ at the Cohoes Music Hall. I was on the Cape when the tickets went on sale and immediately snatched up six, knowing that it wouldn’t be hard to share them with likeminded friends. You know, people who would also be blown away by the fact that RLJ was playing in a 475 seat venue in our area, even if it is a place that always feels like a firetrap to me.

I’ve seen RLJ a couple of times before and I’m familiar with her reputation for being ah…a bit eccentric. The last time I saw her was maybe 7 or 8 years ago at the Bardavon in Poughkeepsie. It was a beautiful venue, but what has stayed with me since that particular show was something Rickie did to one of her percussionists. As I recall, he wasn’t a regular in her band at that time, but was filling in for an absent member. At one point, apparently, he wasn’t playing the little handheld instrument the way she wanted him to. She walked over to him, took the shaker out of his hand and stared him in the eyes as she demonstrated how she wanted it played. It was awkward.

Wednesday night, though, she seemed very pleased with her two band mates, a percussionist and a guitarist. Actually, in general, Rickie seemed to be in a good place, sharing stories and soaking in the love the audience (less than capacity) freely showered upon her. She explained that she preferred to play for small audiences of adorers rather than larger groups who might not really be present for the music. Recalling a story Aloysius had once told me about Rickie leaving the outdoor stage at a show he attended and inviting true fans to follow her to a different, more intimate venue, I took her at her word.

The show was magnificent. Her voice sounded incredible and she retains a control over her instrument which is remarkable. Her setlist was amply stocked with old favorites and more than once she brought me to tears, an experience I don’t have very often at a musical performance. There’s just a raw quality to her work that penetrated that particular evening. I was mesmerized – and not just by the fact that seemed to be wearing the same red velvet Frye boots I scored last month. It was easily my favorite performance of hers ever and I swear it’s going to be one of those shows that becomes legend. 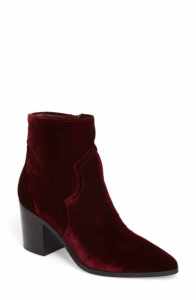 My only criticism goes to the venue’s employees. There was way too much noise being made in the balcony where we were seated as the bar staff broke down their service bar. Buckets of ice being dumped and bottles clanging did not add to the event. What did add to the night, though, was a really good meal pre-show at The Hollow. I thoroughly enjoyed my chicken sandwich and sweet potato fries and look forward to eating there again in a couple of weeks pre-show for the Modern English concert. Maybe I’ll see you there.