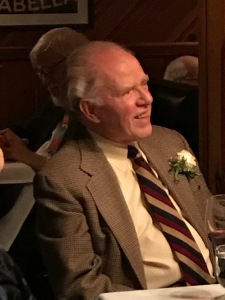 Tuesday night I was lucky enough to join an already in progress festive event down at Cafe Capriccio. Gathered together to celebrate Albany’s literary native son William Kennedy’s birthday were dozens of family members, friends and colleagues. I arrived as speakers began to share their thoughts, memories and best wishes and it was remarkable. The evening’s host, New York State Writers Institute director, Paul Grondahl, invited those present to share their own words in Bill’s honor and for a brief second I considered accepting the offer. It probably would have taken 2 more glasses of wine to get me to speak publicly, but the thoughts that were prompted can just as easily be shared here.

Albany has a modern literary tradition thanks to William Kennedy. His characters populate the streets and the imagination of a city which has been maligned and misrepresented for decades, if not centuries. The stories he has told portray a city filled with residents, frequently Irish American, living hardscrabble lives, corrupt, violent and often tragically funny. The struggles of his characters are familiar and universal, yet because they take place in Albany, N.Y., they are our stories. We own them, just like William Kennedy belongs to us, and despite the less than stellar reputations possessed by so many of his characters, we embrace them.

Because of William Kennedy, and his vision in founding the New York State Writer’s Institute, acclaimed authors have visited our area and shared their craft with audiences at no cost to attendees.  As an undergraduate, I was thrilled to listen to Allen Ginsberg and Joyce Carol Oates read from their work. More recently, an in-depth symposium focused on telling the truth in a post-truth era brought heavyweight journalists to our area for a weekend of timely and interesting events.  None of these experiences would have been available without the NYSWI and we as a city are indebted to Bill Kennedy for the opportunities to hear and learn from literary luminaries and embattled professional journalists.

The third gift I received that night was less tangible than the others and I don’t know if I have the words to describe it. The best I can come up with is it was a combined sense of pride, belonging and possibility. As the child of an Irishman I never met, I’ve sought out Irish culture and traditions for as long as I can remember. Witnessing a roomful of people singing a rousing chorus of Molly Malone (and joining in!) fed my soul as delightfully as Jim Rua’s always-prepared-with-love meals feed my belly. The thrill and privilege of being present at such an incredibly special event is something I will never forget. While I don’t imagine ever writing a book, the fact that Ironweed wasn’t published until Bill Kennedy was 55, and that I was present at his 90th birthday party, reminds me that just about anything is possible.