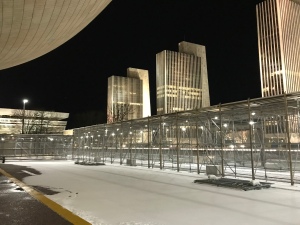 There are two things that people say about Albany* that make me crazy, ok, maybe three, and on the top of the list is “there’s nothing to do.” As someone working really hard to pace themselves, I’m going to tell you right now that that’s crazy talk – there is so much activity in Albany these days, that it’s a struggle to not overextend one’s self by trying to go to every single cool thing happening. Truth.

Late winter isn’t known as the most hospitable time of the year in upstate New York, but we’ve gotten really lucky in Albany and have welcomed some terrific performers to the area already this year. Thursday night I had the chance to see a musician, Steve Earle, whom I’ve been interested to see ever since reading a biography about him. This bonafide American low-key legend rolls through town every so often and friends who were unable to make use of their tickets, were generous enough to make their seats available. And, they were great seats!

Shannon McNally opened the evening with a set of the perfect length, perhaps 40 minutes. She was charming with a self-deprecating sense of humor and a voice that shone particularly well when she and Steve harmonized together. While it didn’t seem that McNally had been to our Egg before, she’s obviously been performing for years and played a set that was really easy to enjoy. I’m still chuckling over a remark she made while gently touching upon life and politics. She quoted her grandfather with the following:

In a hundred years, all new people. 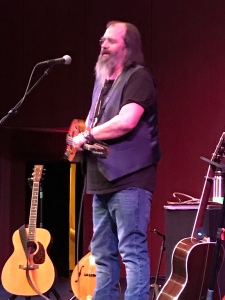 As for the headliner, Steve Earle did not disappoint. The “tools” of his trade, 6 various stringed instruments, were arranged around him like a womb and he played each of them with incredible technical skill and respect. His prowess reminded me of Richard Thompson, in a way. But, when I hear Thompson I can’t help but look for the other guitar player who surely most be playing simultaneously, because one guitar player can’t possibly create that much sound. When it came to Earle, though, my eyes were seeking the additional musicians who had to be contributing to the sound with instruments beyond this one single guitar. He just made so much music! Genius comes in many flavors, friends.

If you haven’t seen Steve Earle, or Richard Thompson, you need to get on that. Keep your eyes open and you’ll be rewarded next time either of them swing through Albany. And don’t miss Shannon McNally – she’s got her own special magic, too.

*(In case you’re interested in the other two things rounding out my list – “there’s no parking” and “the taxes are too high.”)

2 thoughts on “Steve Earle and Shannon McNally at The Egg”