I’m no army brat, so the term captain isn’t one I use with any frequency. Which is probably why I took note of the fact that I did indeed use the word twice in a single evening recently. Both were in the “proper noun” category, meaning a place and a person, (of sorts) and both have left me feeling reflective. I’m not complaining, it’s not a bad way to be, particularly as my academic years winds down.

So, the first occurrence was related to a mega reunion, involving many graduating classes, which occurred last weekend. While the event initially sounded fun and worthy of a drive “home,” as the date approached it began to feel less and less appealing. I don’t like really big crowds and I didn’t think I would know many people there. My immediate classmate cohort had been a freshman class of 65 which the much larger class(es) we were merged into, in a neighboring district (we didn’t have a high school in my town), had either absorbed or spit out. What was the point of driving 100+ miles to talk to people with whom I wouldn’t necessarily have engaged 35 years ago?

But, then I started seeing the names of the people who were making significant effort to get to Orange County and I reconsidered. I still didn’t feel comfortable going to the large, and probably loud, outdoor party on Saturday, but there was an interest in a Friday evening social at a local place that everyone there had memories of hanging out at during our late teens and twenties.

The get together was held at the Captain’s Table, a joint where softball teams celebrated after every game, win or lose, when we were kids. It was very much a roadside burger and beer stand, with barstool seating and, as I remember, hinged wooden windows that could be dropped at the end of the night. I learned to like beer there, something I had to do because it was the cheapest alcoholic beverage at the time and I was saving my money to travel.

Friday night’s mixer made me shake my head many times, none of which were particularly bad reasons. I shook my head to clear cobwebs and hopefully recall a long forgotten name. Or history. What was our connection? Shared academic classes? Parties? Did we hang out? Where do you start when you’re talking with someone you haven’t seen in 35 years?

There were, of course, some Laker friends whose names are pretty much etched on my heart. Those people? We really know each other and our histories have been entwined for decades. It takes no effort to remember our shared memories, families, or joint experiences and I’m always happy to see them anywhere. That part is easy.

I stayed at the Table long enough to catch up with a couple of people, eat a burger and drink a beer. That was really all I could manage since I needed to drive north again to spend the night with friends in New Paltz. I left feeling a twinge of regret for

1. Not arranging my schedule better to accommodate staying later and
2. Just not being more comfortable with a crowd.

My takeaway from the happy hour is that I really need to either work on my social skills or avoid placing myself in situations like this in the future. I’m pretty certain that I felt similarly after the last big get together. Maybe I just need to accept that I’m not the reunion type? How do you manage similar events? Any techniques you’d like to share for making reunions more meaningful? 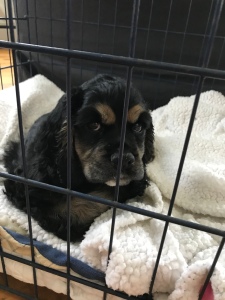 Now, if you’re thinking my second captain of the night was a Captain Morgan and Coke, you’re wrong. It actually involves an adorable addition to the household of friends – a new puppy! Captain is a cocker spaniel who has stolen the hearts, and the shoes, of his new parents since he arrived a couple of weeks ago. It’s been a while since I’ve been around a puppy and I almost forgot how cute they are and how much work they can be! Although Captain is ridiculously adorable and easy to be with (even when he bites my toes), I sincerely salute both of this weekend’s Captains and wish them health and longevity.

4 thoughts on “O Captain! My Captain”