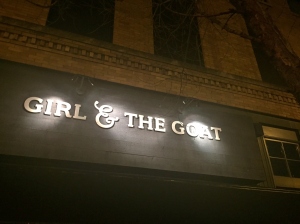 Heading into Chicago I had only a few intentions – to run, to eat and to nap, all on my own schedule. Knowing that the city had no shortage of great restaurants, I decided to do my best to make it to a couple of them, without making reservations or arrangements in advance. I didn’t want to be pinned down to a specific time, preferring to satisfy my appetite when it demanded attention, and I was fairly confident that as a single I’d be able to belly up to the bar for a meal without too long of a wait. It worked.

I made my way uptown to the Girl and the Goat on the train, deciding my nearly 11 mile run was enough exercise for the day. Upon arriving, I was greeted and shepherded to the hopping bar area. As I prepared to order a drink, my veteran restaurant eyes assessed a soon to be open seat and I quickly swooped in to grab it. Seated in less than 5 minutes, I settled in with menus and consulted with a bartender to come up with an order. 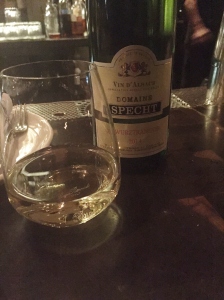 After determining that I was free to take any remaining wine with me, I selected an Alsatian Gewürztraminer, a wine that I enjoy and find to be food friendly. With my server’s guidance, I selected a number of items from the menu, ordering everything at once as is the preference in the restaurant. 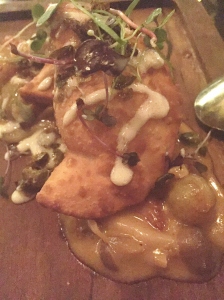 First up were the blue cheese sweet potato pierogis accompanied with a mushroom ragout, mushroom crema and fried capers and finished with microgreens. The flavors were beautifully balanced – earthy, pungent, salty and sweet and the texture of the pierogi was firm in a way that reminded me of samosa more than pasta. Delicious.

I followed with some vegetables – green beans with a fish sauce vinaigrette and cashews. I’d say these were the most perfectly cooked green beans I’ve ever had in my life – firm, yet with an easy give, the bowl disappeared into my mouth with barely restrained haste. Again, the textures were spot on and the portion size was generous.

My final savory course was the crispy pork shank, which was served on an individual cutting board along with a buttermilk dressing, grilled spring onion kimchee and naan. There was also a hot sauce and pickled carrot ribbons rounding out the plate in a cheeky nod to Buffalo style chicken wings. As I was still finishing up the green beans (I’m a slow eater!), the pork was placed slightly to the left of my bar space and after a few moments a server came by and “cracked” my shank open to reveal the moist and tender insides of my meat course. I was starting to slow down a little, but managed to eat nearly all of the pork appreciating the server’s instructions to use the naan to make mini sandwiches. I think I scarfed down 3 or 4 before deciding I really needed and deserved dessert. 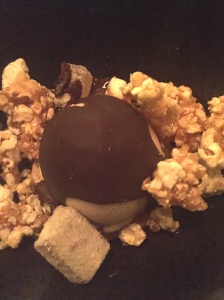 The caramel corn and malt balls – vanilla malt gelato, popcorn caramel and chocolate magic shell, was one of the best desserts I’ve ever had. There was crunch in abundance along with sweet and buttery sensations which had my mouth popping – fantastic!

Service was attentive without being invasive and my wine was kept chilled with my glass never empty. The view of the kitchen added to the meal and I enjoyed watching the kitchen crew working through what appeared to be a perennial slam. Satiated, without being stuffed,  my remaining wine (nearly a half bottle) was bagged and I happily paid my check ($120 with tip and a $44 bottle of wine) and called for an Uber. Well done, Chicago.

One thought on “The Girl and the Goat and I”