After what felt like an extended time, I finally went for a run last evening. Knowing that the golf course is going to be lost to the golfers again soon, I planned a loop that would include the front 9 and brought Jeter along. He and I plodded up Whitehall Rd and turned left onto New Scotland. As we approached the course, Jeter’s pace picked up in anticipation of getting off leash for a romp. Muni is his favorite place.

We worked our way around the holes counterclockwise encountering dogs and  pausing for play time. At about the half way point, there were 3 or 4 dogs with 2 or 3 people and Jeter greeted everyone with a tail wag. A beautiful silvery gray dog came towards Jeter and I noticed his presumed owner jogging, leash in hand, in her dog’s direction. The gray dog started herding Jeter and Jeter just submissively permitted it. The dog became more aggressive and started nipping at Jeter. Things escalated and quickly became out of hand.

The owner of the other dog did not have control over her dog. He snapped repeatedly at Jeter as I tried to separate the two dogs. I felt really scared and yelled at the woman to make her dog stop and she attempted to grab her dog. Finally, she got a grip on her dog’s collar and was able to restrain him. Jeter came to my side and I got his leash on him without delay. He seemed ok, tail wagging and ready to move on.

I spoke to the woman briefly as she apologized. I explained that animals are animals and that I didn’t blame her for her dog’s aggression, but that if her dog has a history of reacting aggressively, she simply needed to keep him on a leash. Always. She didn’t disagree.

Jeter and I jogged off. A few minutes later, I noticed blood on my hand and jacket cuff. I stopped and looked Jeter over more thoroughly and realized he was bleeding. The other dog had drawn blood along the side of Jeter’s mouth. He really had been roughed up. 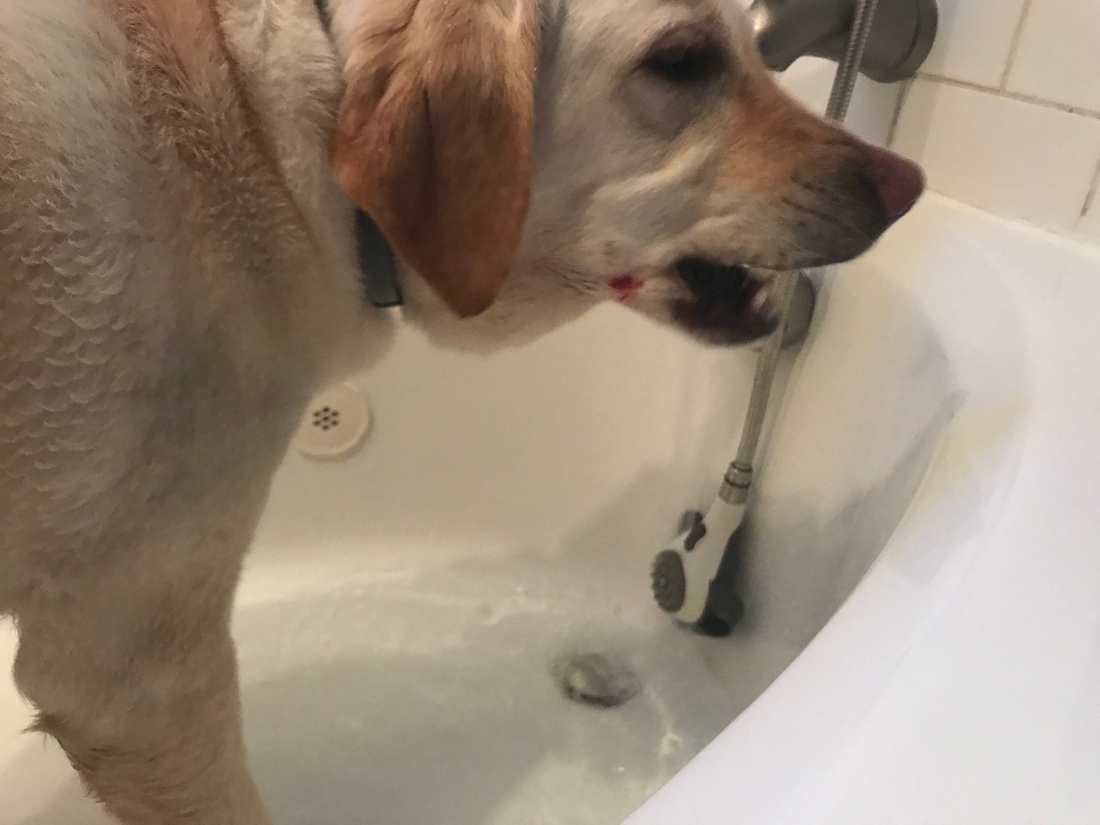 Dog season at the golf course is nearly over and, generally, it’s been a good one. Lots of skiing, running and walking has taken place during our terrific winter. It’s too bad that this incident has left a bit of a bitter taste in my mouth, as well as a bloody taste in my canine buddy’s mouth.

Folks – if your dog can’t play nice, do us all a favor and keep them limited to leash time. My dog doesn’t deserve to be injured because your dog doesn’t interact with other dogs in a positive way.

4 thoughts on “Jeter got jumped”