There have been four occasions in my life which have compelled me to talk with a professional about issues I was experiencing. Well, five if you count that time in high school when I was referred to the school psychologist because of the inconsistency between the results of my Stanford-Binet test and my actual grades. It’s a long story, but that didn’t work out at all. Which was disappointing because I recognized, even at 17, that mental health is important to attend to and expensive to pay for.

The first time I went to therapy on my own volition was when I was expecting my eldest child. I felt the need for some help resolving my own relationship as a child to better prepare myself to be a parent. It was productive and I gained some perspective and confidence. A few years later, when I couldn’t stop seeing the Towers fall every time I closed my eyes, I went back and worked through the sense of loss and sadness that 9/11 caused me to feel. That time invested, I believe,  helped me feel emotionally intact enough to deal with my cancer diagnosis and treatment the next spring. I was good.

With three children, a full time job and a part time job there wasn’t a lot of time for personal reflection during the remainder of that decade, but my divorce in 2011 took me back to the couch, so to speak. I think that particular crisis occupied a good 6 months or so before I was swept up and into a new relationship. The demise of that coupling was the most recent impetus to again seek an impartial observer to help me

a. sound out some stuff,

b. figure some things out and

c. learn how again to accept what I can’t control.

Because that’s what it’s about, at least for me – accepting things I can not change or control.

In the interim between my divorce and subsequent relationship ending, my therapist retired and it took a couple of providers before I found a new one with whom I was comfortable. I think the beginning of our work was simply my needing someone neutral and completely uninvolved to interpret a series of actions and inactions, a person to respond to a situation without really knowing either party.

I was in full out emotional shock when we began. It seems I really am remarkably gullible. But, as our work continued, I found myself understanding that it is unreasonable to allow your time to be occupied being angry with yourself because of how much time you spent with someone, because that’s just dumb. I was reminded that fire can create heat or light and I read things like this: 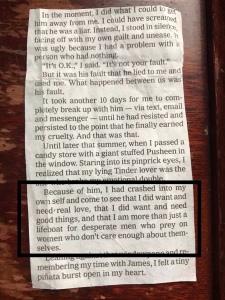 which resonated so deeply inside me that I kept it in my wallet for nearly a year. I forgave myself for caring too much after finally understanding that that is far less a crime than not caring enough. I realized that I’m a scab picker, not content to leave something alone as it heals, but instead, prompted by the knowledge that it will never bleed again as much as it did the first time, compelled to open it up and see what’s really going on below. Even when the remaining scar will be larger.

And I knew the only direction to move in was forward. So I did.

My last few therapy appointments, ever increasingly spaced out, have felt different. It almost seemed as if I was searching for topics to talk about and I cut the sessions short, because I was just done. I have other things I’d rather do with my time.

One thought on “Time for therapy”