I don’t remember not knowing gay people. My mother had matter-of-factly told me as a young child, that sometimes women loved women and men loved men and it meant the same thing as a man and a woman loving each other. It just was. That made sense. It was simple.

When I moved to Albany and began working in local restaurants, I formed relationships with lots of gay guys. I mean, it’s the FOH industry demographic much of the time. Say what you will about stereotyping, but gay men generally have style to spare. Some of my happiest memories are of hanging out with the Yono’s crew in the late 80s and early 90s, doing a circuit from The Griffin to the (State Street)Pub to the QE2 before ending the night at the Palais. Good times with great friends with whom I remain in contact to this day.

For whatever reason, many of the former students with whom I still correspond are gay adults. I see them and their creative, successful lives and I am just so thrilled to be a witness to it. Their lives are rich and opportunities seem to be much more fairly distributed than they may have been in the not-too-distant past. The expansion of same sex marriage, and the societal benefits which come with marriage, have finally legitimized a relationship that for far too long had been considered inferior or abnormal.

Things surely are better now. We’re past all that, right?

Except, in recent days there have been a couple of incidents that have me questioning how much progress has truly been made. The first situation involved a public display of LGBTQ reading materials. From what I understand, a community member had a strong and negative response to the materials being showcased and responded with an act of vandalism. Immediately remorseful, the perpetrator offered a sincere confession and evidence of suffering from anxiety. Something about those books triggered* a person to commit violence. The story made me feel really sad. 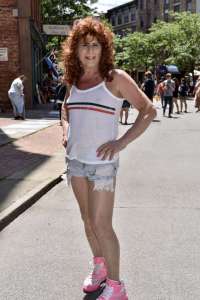 On a sunny afternoon in Troy a few days after hearing about the act described above, I met Peggy LeGee, a transitioning woman who possesses a level of openness and enthusiasm not often seen. After I took her photo, we spent the next 10 minutes talking about her career in education, performing and art and her upcoming retirement. She was excited for her next chapter, tired from the conflict of realizing herself in an educational setting and suffering professional disciplinary actions as a consequence. It must be exhausting to have your need to express yourself met with resistance and even punishment.

These two examples may not initially seem to be related, but there’s a common theme of acceptance in each, don’t you think? Or maybe I should say, lack thereof. Why isn’t acceptance the default instead of the exception? What do you care about who someone loves? How does it impact you if a person chooses or feels compelled to present themselves as a particular gender or sexuality?

Respecting one another and our own individual need for personal expression and realization shouldn’t be as rare as a mythical beast, or merely for the month of June.

*triggered is only bested by “pushing the envelope” from being my least favorite term, but it’s the right word here.