I tried a new Pandora station for yesterday’s afternoon run – Alabama Shakes radio.  It opened with an Amy Winehouse song and never looked back.  Good stuff.  When the first Alabama Shakes’ song, Always Alright,   came on, it took me immediately back to Silver Linings Playbook, a movie (and book) I absolutely loved. 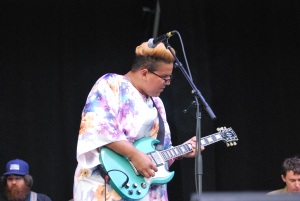 I started thinking about when I saw the Shakes back in June at Mountain Jam and how, as I was photographing the band for the Times Union, I was approached by a woman who requested that I share some of my photos with her.  It turns out this woman, a hair stylist, had done the lead singer Brittany Howard’s hair that morning and was hoping to get some good images to help promote her business.  Of course, I complied and emailed her a number of jpegs a few days later. 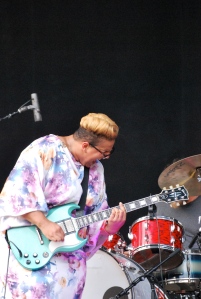 I wondered how I had ever created a life in which I occasionally get to take pictures of famous people.  I mean, really? How friggin lucky am I?  I thought about The Shakes, and the presence of their music in a Bradley Cooper/Jennifer Lawrence film, and considered how much I enjoy the talents of each of them.  I shook my head in amazement that I could probably play Six Degrees of Separation and get to Bradley Cooper.  It made me smile – despite the bag of dog poop I was toting.

Speaking of which, sometimes it feels like I’m closer to Bradley Cooper than I am to a trash receptacle when it comes to running my regular 5-mile loop.  While I thoroughly enjoy the thought of having a connection to the very handsome Mr. Cooper, I think I’d be even happier if there were more trash cans available along Whitehall Road and New Scotland Avenue.