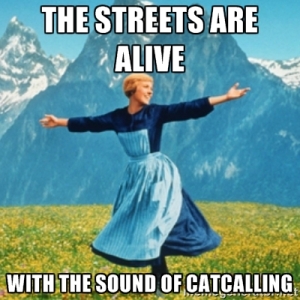 Damn, girl. You lookin for a friend? You work out!

I know I’m expected to be offended by the words above, but, I’m not. I’m almost 52 years old and a young man (maybe 25?) who was tall, handsome and jacked, said those very words to me last night as I walked to the Empire State Plaza. I’m probably old enough to be his mother and, instead of feeling disgusted by his attention, I was absolutely flattered. Is that weird? Wrong?

In these #metoo days it sometimes feels as if we all are expected to respond to something in the same way, as if we share some mass mentality that takes offense at exactly the same things. Maybe for you, a man less than half your age conveying IN A NON THREATENING WAY that he appreciates your physical appearance is an act of disrespect, but I don’t feel the same way. Perhaps that’s because each time it happens, I think to myself “this might be the last time this happens to me.” Maybe I’m just not ready to become invisible yet.

This guy did not intimidate or harass me, nor did he follow me or demand my attention. There was no pressure on me to respond and I didn’t, beyond a bemused smile. I wore that smile for the rest of the evening, truth be told.

While men may be more inclined to utter out loud their inner thoughts when it comes to a female’s appearance, I can confess that my women friends and I guilty of objectifying the male form in a similar fashion. We’re just a little more evolved about actually expressing ourselves in these particular situations, which makes catcalling one of the few areas of communication in which men exceed women in their ability to share their thoughts.

One thought on “Street talk”