It’s been just about exactly twenty-one years since I last painted the upstairs bathroom. I’m not always so clear with years and dates, but this one is easy to remember because I was pregnant with my second son. My water broke as I raced to get the newly renovated third floor of our house prepared for our expanding family. I was on the bathroom floor scrubbing grout when my labor began – and my interest in hands on household projects ended.

Other than swapping out the vanity about a dozen years ago, I’ve basically done nothing to that bathroom in this century. It’s been the boys’ bathroom for a long time and, by the way, boys can be gross. There wasn’t a lot of incentive for me to invest in prettying it up when the guys (and the Enzo cat) weren’t the most tidy of shower mates. But, when the shower leaked, again, I finally committed to investing some money and improving this room.

The faulty shower was the natural starting point, because that was where the major problem was. The shitty shower we had initially installed, because it was cheap, needed to go. 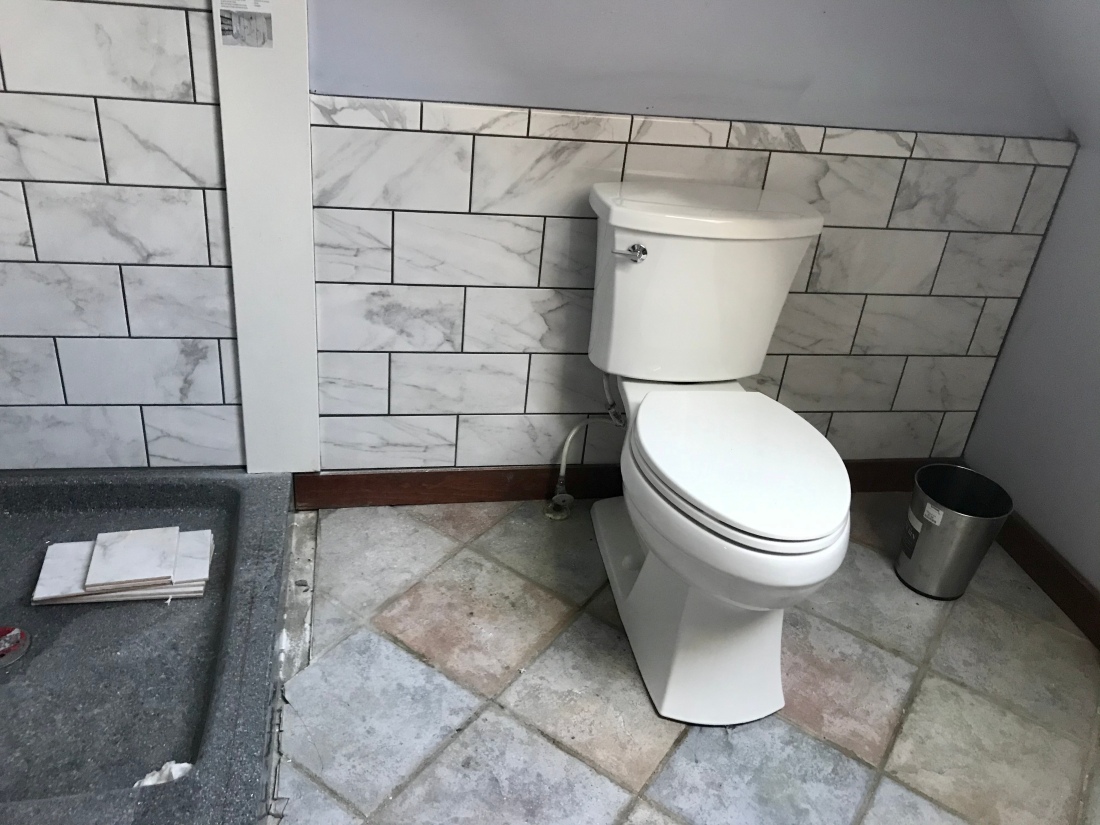 I found a great contractor who showed up when he said he would and was incredibly easy to work with, and got started with a firm budget in mind. Along the way the job has evolved to include a few more things, like extended tiling, more expensive tile than originally budgeted, a new toilet…, but we’ve mostly maintained the budget and I’m happy with the value of my investment.

As you know, if you’ve taken on a project like this before, once you do one thing, everything else looks crappy. I think I want to pick out new light fixtures to freshen things up even more. Seems like new towels might be a nice touch, too. Maybe even a plant.

I took on the task of painting the bathroom myself and finally was motivated Saturday. I gathered together everything I needed, and picked up a few necessary items at my local hardware store, Bridgeford on Delaware Avenue.  Turning on a 60s Apple Music playlist, I began prepping.

First, the walls needed to be wiped. Next, the floor was vacuumed with a shop vac. Then the taping began. Using newspapers and blue painter’s* tape, I started taping off the tile and trim work. Then I mopped. There was a time when (like prior to my experience yesterday) I despised this prep work involved with painting. It just always felt so damn tedious and took too much time.

Something was different, though, yesterday. Instead of dashing through the prep process, I decided to slow down. I’m older. I now know that cleaning up one’s mess is a far more tiresome task than honoring the process of getting ready for creating change.

After sending out a social media post asking for help in opening my can of paint,** I got busy rolling and brushing the walls. As I covered the soft lilac on the walls with bright white, my thoughts were free to roam. I considered the countless ways my life is different than the one I was living last time I painted those walls.

The baby filling my belly then is turning 21 at the end of this month. Time certainly does move on.

I coated the walls and let my thoughts travel from the past to the future and, finally, to today. There have been so many experiences and adventures and moments in my life and many of them have occurred within the “confines” of my years spent in this house. Painting it isn’t a chore, it’s really more of a gift to this place which has sheltered me and those I love.

This morning, before breakfast and coffee, I put on my painting clothes and did a second coat. I think I may even need to do a third, a realization which no longer discourages me because I’m kind of enjoying the combination of physical work, but mental indulgence, that painting involves. Covering a no longer favored color, while recalling special memories, makes for a solid win-win.

This bathroom redo has been a very good investment.

I can’t wait to get to the bedrooms.

*I’m really unsure about this usage…painters’?

**A flathead screwdriver was the most recommended tool.