I sat on the couch last evening, occupied by my keyboard and the changing sky outside my closed sliding glass doors to the deck. The dramatic rain had stopped and I noticed the late afternoon sky oddly becoming more light, rather than more dark, with the approach of evening.

I stepped outside to look more intently at a slice of blue suspended between clouds of grey.  The promise of blue was inspiring and reassuring, confirming my instinct to look for the light, instead of focusing on the grey. I shifted my attention  east, where there was a beautifully vivid rainbow arching over my neighborhood. Delight filled me.

I climbed, barefoot, up onto a chair trying to get closer to the rainbow. I couldn’t stop smiling. After a few minutes, I managed to pull my eyes away from the constant, but ever changing, view. I turned my eyes further north to see an even more striking ribbon of color in the now blue grey sky. This rainbow was amazingly enough mirrored by a smaller, softer version of itself. I felt giddy. 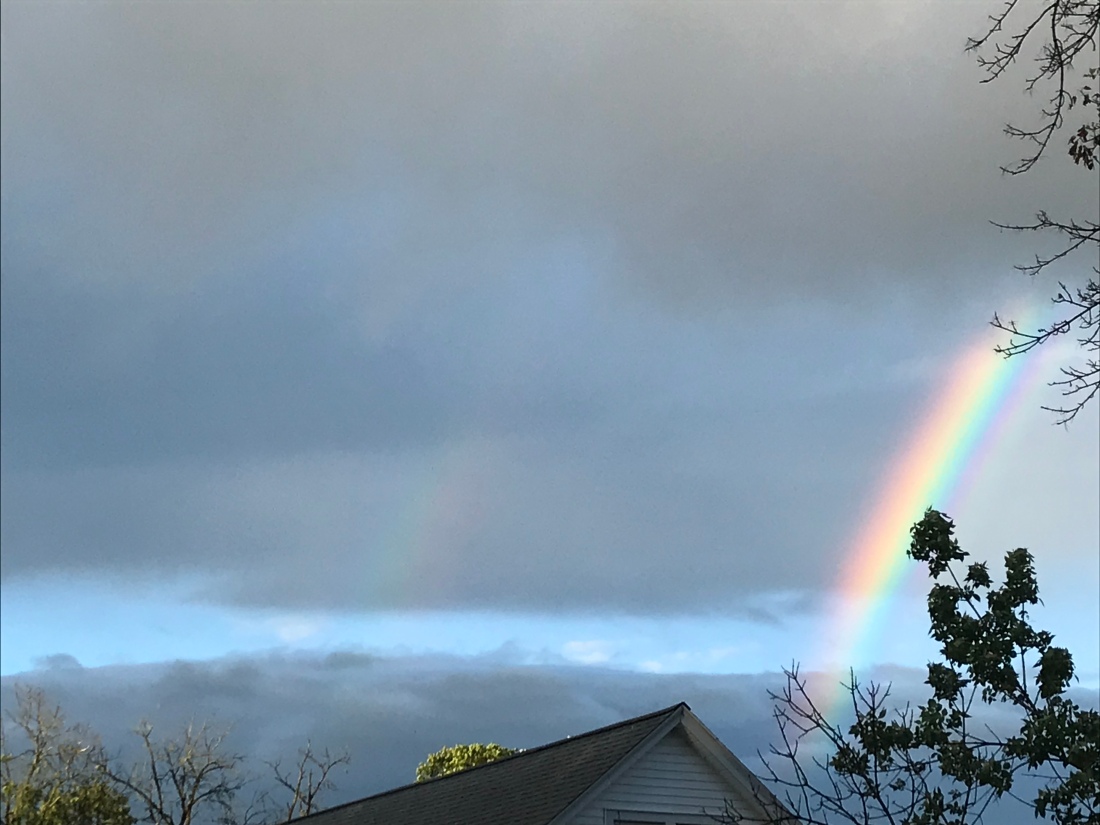 Rainbows happen all the time, right? There are uncountable pictures and IG accounts hashtagging  #rainbows, so there must be no lack of magically colored images. It kind of amazes me because, as a kid, I remember rainbows feeling very rare. Magical. I didn’t know how to find them. Often, they had to be pointed out to me.

Maybe, back then, I was more enthralled by the promise of gold at the end, than I was about the immediate and powerful beauty of the sky’s colorful display. Perhaps my attention was too occupied to take in and appreciate something that arrives without sound. I‘m certain I missed quite a few rainbows (and maybe even some unicorns) over the years, but I’m keeping my eyes up these days.

Suddenly, I’m seeing rainbows all over.

6 thoughts on “Rainbows. Maybe even unicorns”