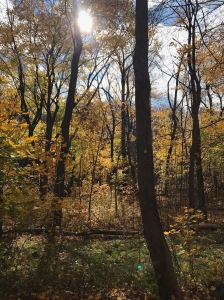 Jeter and I went for a little run the other afternoon. It was little because my body is currently in protest mode, refusing to run more than 3 or 4 miles without demanding a stretch or moment’s walk. The discomfort has shifted from being exclusively felt by my feet and hips to a more general sensation radiating from my rear pelvic region, hips and glutes. A joy it is not.

We ran one of my favorite routes – down the yellow brick road and around the perimeter of the big field down by the Normanskill Farm. Jeter swam for the last time of the year (again) and I chugged along the path, consoling myself with the view as I tried to focus on the positive. Like the view.

The trees remained beautiful, despite the scarcity of the leaves clinging to their branches in their shades of orange, yellow and red. I thought about a recent meme I had seen.

I considered the irony of reaching peak beauty only to release your stunningness and watch it fall to the ground.  I chided myself for not having the same grace, for not being as capable when it came to letting go.  Why was I occupying my mind with thoughts of how much easier this run once had been instead of celebrating the fact that I was simply out there doing it?

Wasn’t it unreasonable of me to expect to remain the same physically despite the passing of time?

Maybe I was past peak.

It’s not like a tree losing its leaves dies. No, it just shifts into a different season, one in which it strips itself bare and hunkers down until the eventual snows melt. In spring it returns to life with the coaxing of the sun. It’s probably not exactly the same in its new year as it had been in its past, but it really doesn’t matter to a tree, does it?

It shouldn’t matter to me either.

One thought on “Past peak”