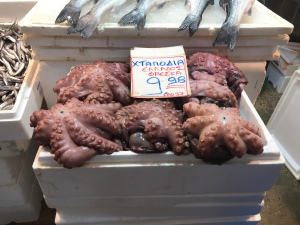 In Athens our only organized activity  was a 3.5 hours food tour we booked through Airbnb Experiences. (Remember I did another one of these in Galway earlier this year?) if you’re traveling I recommend taking a look at Airbnb’s site and checking out what might be available at your destination. These excursions, classes and activities seem to be much smaller scale tours than some of the more commercial ones. For instance, our tour was 6 + our guide, Marina, and her assistant, Maria, which made navigating Athens’ busy streets easier than it might have been with a larger, more cumbersome group.

We met at Monastiraki station near the Plaka and once introductions were made, we went directly to a spot, Creme Royale, for traditional pies, with both savory and sweet on our menu. If you immediately think round pies, you’re wrong, because these were rectangular for the most part and served in a slice rather than a wedge. As Marina gave the staff notice that we had arrived, we remained outside a large window captivated by the grace and skill in which the baker manipulated the dough, stretching it to a remarkable thinness which required a rolling pin, but also a couple of vigorous tosses in the air akin to the actions of a pizza maker. When the dough was to his satisfaction in terms of both thinness and layers, he cut it into a wide swathe, topped it with filling, folded it unto itself and sealed it closed.

We were able to taste five – one of savory cheese, a spanikopita style with spinach and feta, a pork and beef, and one that was filled with a sweetened custard, my favorite. Additionally, we were provided with a different styled which was round and filled with meat and a sauce which was reminiscent of American bar-b-q. Remains were packaged to either be divided amongst the tour goers or given to the homeless along our way, the unanimously agreed upon perfect solution. 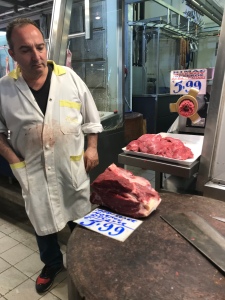 Next up was a walk through the old fish and meat market. This was absolutely remarkable. The fish was so marvelously fresh that even on a very hot day (90+ F), there was minimal fish smell. The vendors were friendly and humorously aggressive about selling their products and the stalls were clean and surprisingly lacking in cats because cats are everywhere. How they keep them out of the open air, but covered, market is a mystery. After touring the central area of the market, we did a broader loop and covered the part of the old market where the meat vendors ply their wares. In this area of the market vendors were provided with butcher blocks on which to chop and the cleavers were put to good use as customers requested particular cuts of beef, lamb, chicken and pork. Also available were some more exotic meats such as rabbit and water buffalo. Again, there was surprisingly little aroma, which was a bit of a relief to me.

Naturally, our next stop was for cheese, cold cuts and yogurt at a small place called Zarkadian. Beyond the deli display cases there was seating and we were made quite comfortable with water, red and white wine, ouzo and a Greek style of grappa. Anise is not my thing and I was a little afraid of the grappa, so I stuck with wine as I enjoyed the bountiful Greek salad, array of cheeses and sliced meats including both water buffalo and camel. Yes, camel and no, I’m not sure if it was one or two hump camel. It was dried, and the texture was between a prosciutto and a jerky with a flavor I can only describe as different. The fruit topped yogurt was the perfect aperitif after indulging in a taste of almost everything so generously presented. 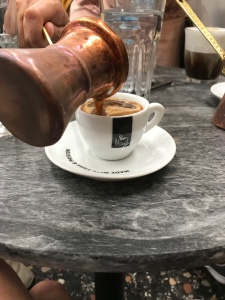 Feeling temporarily satiated from our consumption, we made our way to Mokka for coffee. Here I had my first Greek style coffee. Served in a long handled copper pot which is poured tableside into your cup, my coffee was bracing, yet smooth. It turns out the Greeks have their own obsession with coffee and there were many varieties from which to choose. With caffeine now coursing through our veins, we leisurely walked to our lunch destination Tis Theatrou to steki for “tapas style food.” Or maybe better read as “an incredible spread of numerous small dishes made with a variety of ingredients.” 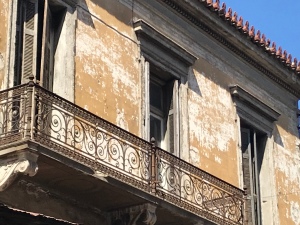 We arrived and were seated at a large table outdoors with a view of a crumbling, yet still distinguished building. As Marina explained, countless buildings were torn down as Athens expanded and lifestyles changed in modern times. It wasn’t until the latter half of the last century when buildings were retained rather than destroyed for the sake of new construction. Now it seems the buildings are left to deteriorate or, on rare occasion, be rehabilitated. Our luncheon was extravagant in variety but simple in flavors – olive oil, oregano and basil played starring roles, as did tomatoes, beans, eggplant and yogurt. It was divine.

There was still one final stop, Serbetia tou Psyrri, for desserts. In my world, there’s always a little room left for something sweet and we were at the right spot. This family operated bakery had a display of fantastic looking cakes and baked goods and we were lucky enough to taste 3, along with a sampling of ice cream. I was pretty much in a food coma at that point, but the delicacy of the pastry and the limited amount of sweetener, be it sugar or honey, helped me to thoroughly enjoy each bite. 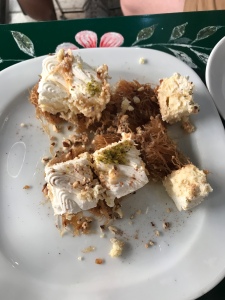 I can’t recommend Marina’s Taste of Athens tour enough. It was an excellent value at approximately $65 per person and it is a great way to discover the cuisine of Greece with a guide who is knowledgeable, personable and enthusiastically proud of her home.

Also – I took most of my photos with my Nikon and they won’t be available until I’m home. I imagine I’ll do a number of posts that are just photo-centric at that point, so come back to DelSo again if you’re interested!