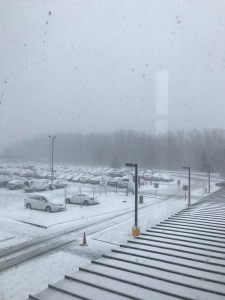 Last night I should have been settling in to my second cocktail of the weekend with the sound of waves in my ears and the scent of salt water filling my nostrils. Instead, I was cozied up on the couch wrapped in a cashmere robe with more holes in it than my aborted weekend plans, watching yet another episode of Sex Education…what is it that they say about the best laid plans?

I initially booked a quick trip to Florida as a chance to see friends and get a dose of vitamin D. I had enough JetBlue points for a free ticket, multiple options for places to stay and plenty of people whom I love and enjoy spending time with. A $100 rental car would cover my three days and provide me with the independence to come and go as I please. Seemed pretty ideal.

Admittedly, the fact that I forgot my son’s birthday took a bit of shine off the weekend, but he was okay with it and his present was on track to be delivered precisely on his birthday. I was covered.

As the weather report evolved and Friday afternoon seemingly became the absolute worst imaginable time to fly with mixed precipitation and wild winds, I started getting concerned about my ability to get out of town. I arrived at the airport with plenty of time to spare and settled in at the gate to wait. That’s when things took a bad turn.

Our plane had been unable to land in Albany due to weather conditions and had been diverted to JFK to refuel. We were going to be delayed. I started thinking about arriving in Fort Lauderdale closer to 9:30 instead of 8:20. Next we heard our plane from JFK couldn’t take off because of weather conditions in NYC. Our expected departure time changed again. I called my car rental company to talk about a later pick up time.

Phones in the waiting area chimed again – our flight was going to be further delayed. I approached the check in desk to ask about cancelling my ticket, and having my points returned to me, and was advised to call the 800 number to speak with someone who might be able to help me.

The expected departure time changed again – best case scenario had the flight arriving in Fort Lauderdale close to midnight. The car rental office closed at 12:30, making that an uncomfortably tight transition for me. I called JetBlue and was completely satisfied with their willingness to cancel my ticket and refund my points to use another time. I made a couple more calls, notifying friends and cancelling the car rental.

I retrieved my car from the valet and decided to treat myself to dinner, craving anything that would go well with a glass of rich red wine. I drove towards Yono’s but, upon seeing the marquee at The Palace, realized that getting in an hour before Cheap Trick hit the stage wasn’t likely. I crossed Lark St. thinking I would finally try the cacio e pepe at 288 Lark Wine & Tap, but just felt the need to be closer to home. Nicole’s it was. 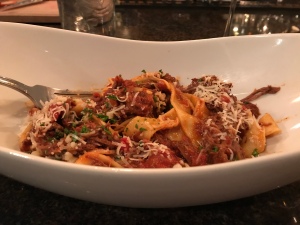 I settled in at the bar with a menu and the capable Logan in attendance, He poured me a gorgeous glass of Valpolicella and I eventually selected the fried artichokes and a half order of pappardelle with a hearty beef short rib ragu. It was exactly the kind of meal a snowy February night demanded.

I heard familiar voices from the dining room and was really happy to see some folks that I’ve known since the McGuire’s heyday. We caught up and shared a few laughs. It might not have been Florida, but it still felt pretty warm to me.

One thought on “When flying south flies out the window”