Last weekend my youngest son did something I could never imagine doing – he performed onstage as Prince Charming in his school’s production of Into the Woods.Sitting in the audience and watching him act and sing made me incredibly proud of him. Not just because he was great, which he was, but because he had the confidence to put himself in the spotlight. Middle school years are hard ones and kids are so critical of one another (and themselves), that placing one’s self in a position of vulnerability takes a lot of nerve. It was a great evening, made even better with the presence of my middle son and a couple of other 20-year-olds whom he dragged along to witness his baby brother’s shining moment.

It was a special night to be the mom of these Lilly guys and I hope Q continues to stretch himself and explore newly recognized talents and that G stays as sweetly supportive as he was on Friday.  My heart feels full.

A due date becomes a do date – 22 years later, that is

My first pregnancy was pretty dreamy – I conceived the exact month I wanted to, which meant my maternity leave would be perfectly integrated with my academic calendar. The Lilly baby was due April 5th, which would give me about 6 weeks home, followed by 6 weeks back at work, and then summer off. It all seemed pretty ideal.

Of course, Liam was born 5 1/2 weeks early, arriving at the end of February, rather than early April. Obvious proof, of course, to support the theory that parenting is state of being that can not always be controlled. That perspective, along with the knowledge that once your child almost dies, subsequent things that occur to them make one both less concerned, and more inclined to worry, are how I’ve rationalized a lot of things in the last 22+ years. So far, so far mostly good.

When it came time to celebrate my oldest’s most recent birthday, we headed to NYC, a full six weeks after his actual birthday, but the day before his original due date. He was interested in seeing a performance at the Metropolitan Opera House and it was challenging to synchronize our calendars and that of the Met to get to the opera that he wanted to see. We were able to find a mutually good date on Thursday and grabbed Amtrak to the city, leaving ourselves barely enough time to eat a couple of slices, get checked in to our hotel and catch the subway to Lincoln Center. 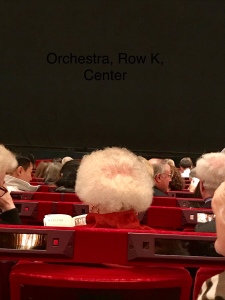 We were cozy in our upgraded seats (When we picked up our tickets at Will Call the man helping us said he had “something better for us.” Turns out that was 11th row center in the orchestra. Bonus!) when the chandeliers lifted to the ceiling and the lights went down. The music was fantastic and the conductor led the orchestra with as much well placed energy as I’ve ever seen. Take this all with a grain of salt – I know nothing about music or conducting.

Don Giovanni is a wonderful opera and the costumes, sets and singing created an experience which was satisfying. I mean, come on, the cad gets his comeuppance! Everyone loves when that happens. While the demise of Don Giovanni was dramatic and well depicted with fire, there were also some more lighthearted scenes with clever dialogue and wit. Admittedly, I dozed a bit here and there, but I don’t believe I missed much. I had feasted on the production and felt sated. It was way better than a C-section.

When music makes one a little sad – The Cohoes Music Hall

Saturday night, a friend and I drove up 787 to check out a guitar player he admires. It was a miserable night, but I was excited to see a live performance and I had never been to this particular venue before. You know me, always up for a new experience.

I don’t remember the last time I went to Cohoes, but I imagine it has to have been at least 5 or 6 years ago. The area surrounding the music hall is one that I am not familiar with, but it seems to have experienced numerous up and down cycles. Typical for a small city, I imagine. We struggled a little bit to find a parking space, but were able to park a couple of short blocks away and fortunately the rain had temporarily relented.

From the exterior, the Cohoes Music Hall doesn’t tip its hand in any way to reveal that it is a performance venue. Even after stepping inside, there was no indication of where to go to access our seats. The stairs up were our only option, so we took them eventually arriving in a lobby of sorts. There was a coatroom, bathrooms and a concession stand, but it was all kind of oddly situated. I’m all about vintage theaters, but this one just felt a little awkward and not particularly aesthetically pleasing.

We made our way, with the assistance of an usher, to our seats. The lights were still up and we were directed to “our bar” where there were quality options at premium prices. We passed on drinks and settled into our comfortable seats and I began to look around.

It is definitely a cool venue with decorative ceilings, curved banquet seating and an old fashioned charm, but…

There was a distinct air of neglect to the space with the ceiling art faded and the velveteen upholstery shiny with wear. The state of the room made it feel and look like the step-sister of Albany’s Palace or Schenectady’s Proctor’s. It made me wonder who the theater had originally been constructed to serve and what had happened to those people. Would they ever have been able to imagine the run down condition of what once must have been an elegant performance room?

Eric Johnson was well worth seeing (he plays that guitar with his entire hand), but I left Cohoes wishing we, as a community, could better support this venue. I didn’t expect to get the blues more from the venue than from the actual performance.

On Wednesday morning, Tom packed up the two younger Lilly boys and headed pack to Albany to resume his restaurant responsibilities at Dale Miller. Liam & I left the apartment right behind them and went straight to the TKTS booth to queue up for matinee tickets. Liam has been absolutely set on seeing A Little Night Music starring Angela Lansbury and Catherine Zeta Jones since he became aware of this Broadway revival. I’ve been keeping my eye out for tickets and we got lucky, in my opinion that CZJ was taking vacation the week that we were going to be in the city. I have no issue with CZJ (and loved her in Chicago!), but unlike my slightly odd son, it seems that many people are more interested in Catherine than Angela. The line in Times Square wasn’t too long and I felt comfortable that we were going to score tickets. As we approached the booth I was bummed to find there were only single seats left available – no, there was a single seat available. Damn! We abandoned the line and made an attempt at consolation – retail therapy style. Macy’s, Anthropologie, Toys r Us and a few other favs of mine on lower 5th. Nothing really cheered us up – even the chicken noodle soup we had at the midtown deli failed to comfort us completely. So…back to the TKTS booth at 2:30 to line up again, this time for the evening performance. Success!
We got a couple of terrific seats for the evening’s performance and even had time for a little relaxation prior to our dinner date at Bar Americain. This place kind of got on my radar after Bobby Flay had dinner at McGuire’s a couple of summers ago. Yeah – I like saying that. Anyway – this was my first time here for more than a drink or lunch and I really like this place. Especially, when you consider it is midtown, not my usual stomping grounds at all. My favorite thing here is the Boston lettuce salad with bacon, buttermilk blue dressing and a poached egg. This salad single handedly taught me that you can throw an egg on just about anything and I will eat it. Liam wasn’t overwhelmed with his options so he ordered a bowl of the clam and sweet potato chowder. And then another bowl. A very enjoyable dinner completely convenient to the theater on 48th St. The show was terrific – Angela Lansbury wasn’t in every scene, but she certainly owned the scenes she was in. The theater was tiny, beautiful and didn’t have a bad seat in it. What a great value, too, at $70 a ticket.
Thursday morning Liam & I went downtown to meet Rachel for a late breakfast in Chelsea – our old ‘hood. There is an awesome (new) little coffee place on our block, The Grey Dog. Walking into the place, I was immediately at home. The music was fantastic!! Seriously, I couldn’t shake the feeling that it could have easily been 1970 – Bob Dylan, Etta James, Joni Mitchell. I had to stop myself from checking in my bag to confirm that my Ipod was still there – when the Jeff Buckley and Sam Cooke came on I was convinced that someone had lifted my Ipod. Aside from the cool vibe, I had a killer egg sandwich which was served on a deliciously buttery croissant. Liam had a gigantic blueberry muffin and a strawberry-banana smoothie which filled him up until late afternoon. At which point, we were back in the 518 – a bit tired, a good bit less flush with cash, but completely saturated by the city we all love. Ah, NYC – until next time…